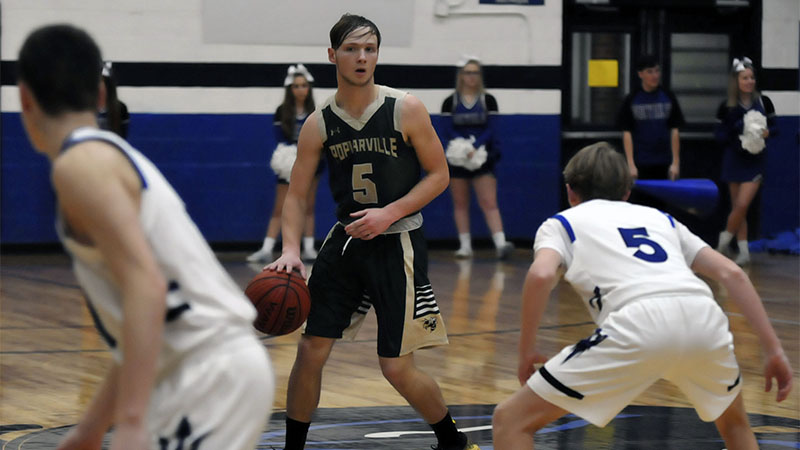 Transition To The Court: Torry Polk dribbles the ball during a game last year. Polk is one of the team's players that's coming straight from the football team to the basketball squad. File photo by Jonathan Mitchell.

Poplarville’s basketball teams took on the Sumrall Bobcats Tuesday evening in an important district matchup that saw the Hornets win one of the two games.

The Hornets dominated the Bobcats defensively while staying efficient on the offensive end of the court to earn a 63-32 victory. Poplarville had three scorers hit double digits, led by Amari Gilmore who had 20 points. Dante Buckley had 14 points and Riley Josey added a double double with 10 points and 10 rebounds. The Sumrall game was the first time the team was at full strength after missing a good portion of the squad during the early part of the season because some athletes were competing as part of the football team.

The addition of the football players meant there were more options available to Head Coach Run Bowen when divvying out minutes, but it also restricted the team’s offensive playbook.

“It made our offense really limited. We only ran two basic plays through the course of the game, and when you do the same things over and over the defense is able to read what you’re doing,” Bowen said. There’s a transition period for the new athletes as they adjust to the team’s systems and the pace of basketball as a whole.

Bowen’s additions to the squad have some catching up to do as the Hornets prepare for a rivalry matchup with the Pearl River Central Blue Devils on Dec. 15.

“Last couple days have focused on defense. (The now available football players) have been with me for three years so they knew what to do, we just had to refine it. Defense was solid (against Sumrall), but that’s something we’ll focus on going forward. We’ll keep introducing them to the new offense, but at the same time we’ll be spending more time on defense,” Bowen said.

The match up with the Blue Devils will be at home, and will serve as a good non-district opponent to test the Hornets.

Since the result won’t affect district standings, Bowen hopes his players use the game to focus on themselves and how they can get better as the season progresses.

“PRC is pretty good and they’ve got a kid that can carry his team, so we’ll have to focus on him a little bit. But the main focus will be to continue to get better at what we do,” Bowen said.

The Lady Hornets had a tough time on the road against the Lady Bobcats and lost 47-19.

The district loss will be followed by a non-district game against PRC Dec. 15, but the Lady Hornets won’t be at full strength.

Head Coach Robin Jeffries said three of her players will miss the match up against the Lady Blue Devils after being sent into COVID-19 quarantine.

The missing players will hurt the team’s depth, but Jeffries said it also opens the door for some players who don’t get a lot of time on the court.

“It’s just a good opportunity for somebody to step up off the bench, play and show they can fill those shoes,” Jeffries said.

It’s a tough situation to be in as the Lady Hornets deal with missing players heading into the final couple of games before Christmas break.

Poplarville had high expectations heading into the season, and the depleted roster will just have to be another obstacle the team overcomes as it fights for an opportunity to play in the postseason. “I know they’re disappointed because of what’s happened to the team with some players being in quarantine because I know we felt really good about this year. We felt like this was going to be our year and now we’ve had a setback, but we just have to pull together and stay together as a team,” Jeffries said.