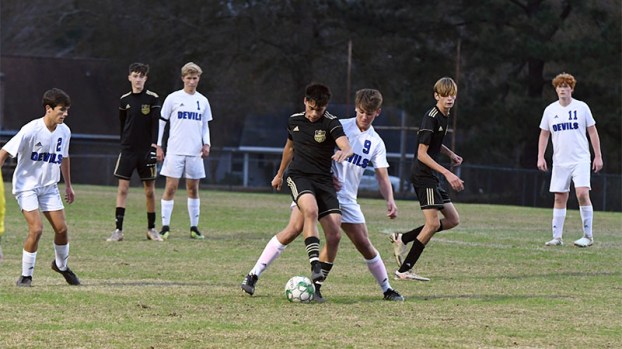 Keeping Possession: Senior Seth Santiago shields the ball from a defender during a recent game. Photo by Jonathan Mitchell.

The Poplarville Hornets’ athletic programs are preparing for an uncertain 2021 after dealing with the ups and downs of COVID-19 in 2020.

New routines became the norm as athletes and coaches alike became accustomed to wearing masks, maintaining social distancing when possible and disinfecting everything that was touched.

Poplarville Athletic Director Jay Beech said dealing with the virus was complicated, and that the consequences of athletes having to quarantine could really throw a wrench in a coach’s plans.

“The biggest hurdles, as far as for coaches, was not knowing who they’re going to have in their line ups. You’d go to practice Monday and feel like you had a good practice, feel good about the team, and then wake up the next day and have two or three of those people out. That’s a constant stress on the coaches,” Beech said.

Athletes could be sent into quarantine for two reasons.

They could either test positive for COVID-19, or have been in close contact with somebody who tested positive. If several athletes were to test positive, then the whole team would have to go into quarantine for two weeks.

Those are just some of the protocols in place to prevent outbreaks, but some of the new requirements weren’t cheap as programs had to invest in cleaning supplies and more vehicles when transporting teams.

“We’re probably getting about half of what we made last year in our budgets. The budgets will likely be 50 percent of what they were years before. Travel has almost doubled (in cost), not to mention all the cleaning supplies you have to purchase,” Beech said.

The financial stresses placed on programs because of the pandemic may have long lasting repercussions as future budgets will undoubtedly be impacted by the decreased capacity at this year’s athletic events, along with the increased costs associated with prevention measures.

However, now that athletes are moving into the spring semester Beech is hopeful coaches and players use the experiences of these past couple months to continue limiting the spread of COVID-19 among programs.

“Coaches should know how to handle it as far as what to expect with cleaning and disinfecting locker rooms. Fans also know what to expect, nothing is a shock. They know they have to wear a mask or maybe buy a ticket in advance. We should be used to that for this (upcoming) semester,” Beech said.

Community spread has been a big concern as well, but Beech said fans understand what’s asked of them while attending games.

“I think our community has done a great job of handling the situation. The community still comes out and supports our sports teams as much as the can, and they’re doing a good job of following the rules,” Beech said.

Four state championship appearances in the past five years has led to the Poplarville Hornets establishing themselves as one of... read more