Poplarville and PRC compete on the pitch 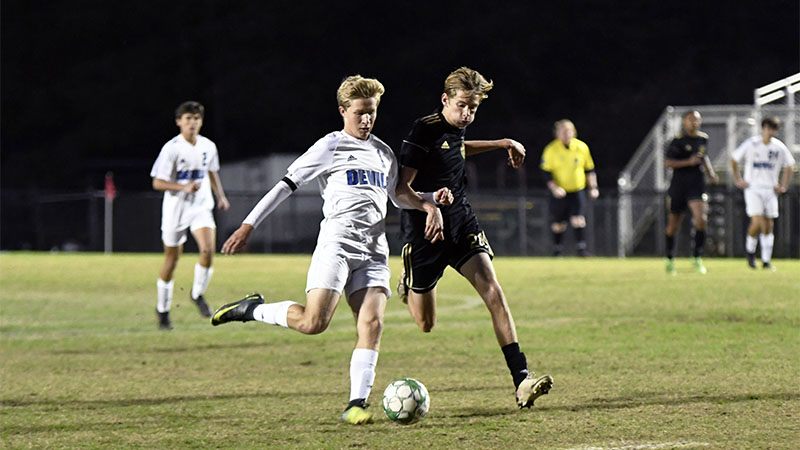 The Lady Hornets won 5-0 against the Lady Blue Devils thanks to a hat trick from Chasity Dearman and goals from Juliana Wells and Morgan Westling.

Poplarville Head Coach Beth McShea said her team didn’t start the game well, but over time was able to play their brand of soccer while dealing with a physical Lady Blue Devils team.

“I think once we got going we did really well with that. It took them a couple minutes, but once they got moving they were able to use their body without getting fouls and assert themselves,” McShea said.

The game was expected to be physical seeing as the two teams are county rivals, but PRC Head Coach Joe Weems was hoping for a better result. Defensively Weems wanted more discipline and better positioning from his players against the Lady Hornets.

“They were out of position and looked like they’d lost their aggression, but being out of position is killing us because we’re not able to stop them from having fast breaks on us,” Weems said.

The Lady Blue Devils still have a busy schedule ahead of them with matches on Dec. 17 and Dec. 18 against Purvis and Picayune respectively.

Weems said his starters will get some minutes against the Lady Tornadoes, but the main focus will be keeping his players fresh for an important district match up against Picayune. Following those games, PRC will head into the Christmas break with plans for a few practices, but nothing intense. Poplarville will mirror that strategy.

“I know breaks are important. Family is important to me and it’s important to them so I like to give them time to do that, but at the same time we will practice and the girls are eager to practice over break because they know our first week back we have two district games,” McShea said.

PRC and Poplarville kept trading goals, resulting in a match that ended with a 3-3 tie.

Zach Carpenter, Seth Santiago and Bryson Andrews scored for the Hornets while Jacob Turnage, Chris Hart and Noah Verweij found the back of the net for the Blue Devils.

Both teams had periods of the game where they were able to maintain possession of the ball and make incisive moves against the opponent’s defense.

Each team had to recover after going down a goal at certain points in the match, which showed the players’ ability to keep battling even when losing.

Weems is hoping his team can replicate the good parts of the Poplarville performance on a more regular basis.

“The guys played well, but it’s not consistent. Not necessarily from game to game, but during stretches within the game. Whenever they try to play harder and faster that’s when they start losing shape,” Weems said.

Poplarville Head Coach Luke Gipson said he was happy with his team’s ability to match up physically with the Blue Devils and earn a draw, even if the game didn’t affect district standings. Now the Hornets will head into Christmas break with several practices planned that will be used to clean up some skills while also looking to the team’s upcoming district matches.

“I’m hoping that we maintain fitness. We also need to sharpen some basic, fundamental skills and we’ll watch film of district opponents we’ve already played and formulate a game plan for them for when we come back,” Gipson said.