Picayune softball ready for season to start amid pandemic 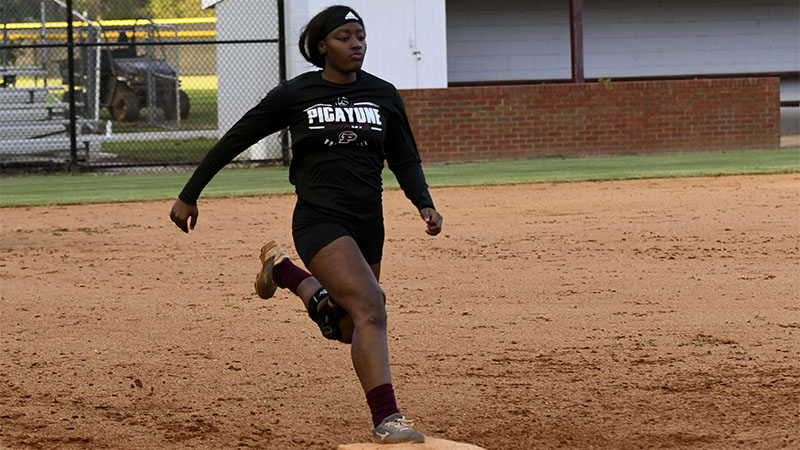 On The Base Paths: Kyra Hathorne tags up at first base during a speed drill. Photo by Jonathan Mitchell.

The Picayune Lady Maroon Tide is ready to get back on the diamond and start preparation for the 2021 season after the early cancellation of last season due to COVID-19.

Practices have been limited because there is no softball class period during the fall semester, so athletes have been working out when possible at the Lady Maroon Tide’s facilities.

Athletes have also been using the fields at Friendship Park to get work in when there aren’t any organized practices.

However, even with all the athletes who take lessons and participate in recreational leagues, some haven’t been on a softball field since last season’s untimely end.

That means some athletes will have to shake off the rust, and considering there will be new members on the team as well, the focus will be on the basics of the game when practices begin.

“I know I have to get them back in the groove. It seems like it’s been forever. I know they’re going to be rusty, but I plan on getting them a lot of reps, I don’t think it’ll take long (to get readjusted). Honestly, I feel like playing softball is like riding a bike. I think they’ll be fine,” Dickens said.Last season’s early end saw the team’s group of seniors play their last game in a Maroon Tide uniform without a senior night to gain recognition, and also deprived younger players of the chance to get meaningful reps. Now that players are beginning to gear up for another season, Dickens is hopeful her athletes understand how much the game of softball means to them, and treat it accordingly.

“I really hope that these kids realize that at any given time this could be taken away from them again. I’m hoping we’ll see different attitudes, a different perspective of the game when they come out. As a coach you tell them to come out here every day and work hard because it’ll be over soon and that really came to reality (last season),” Dickens said.