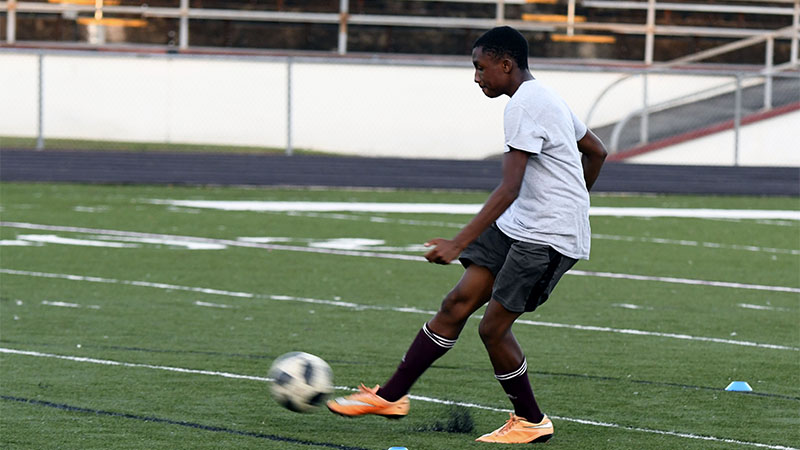 The Picayune Maroon Tide soccer teams took on Harrison Central Monday evening with both teams losing in their first game back from Thanksgiving break.

The Lady Maroon Tide lost 3-0 to Harrison Central with several players out of the line up due to injuries or COVID-19 quarantine.

Head Coach Ed Williams said the team has had to navigate around having several players in quarantine this season, but there’s hope that when district play starts everyone will be back on the field.

“There’s been a few games here where we had people in and out of positions they’re not the most comfortable in. If it happens at the right time when somebody has COVID-19 they could miss several games, so we’re lucky it’s over with before district does start,” Williams said.

The Lady Maroon Tide has had some tough opponents to start the season and as a result suffered some losses along the way.

However, Williams said he’s continued seeing progression in his team no matter the result, even if that’s hard for the players to get behind at times.

“It’s frustrating for them because they want to see wins. It’s hard to keep momentum up that we’re getting better. I told them, ‘You have to trust it, it’ll happen.’ and I think it will,” Williams said.

Picayune will have a doubleheader Saturday against Pascagoula and Oak Grove as part of a tournament.

The two matches will be the Lady Maroon Tide’s final non-district games before the team hosts Long Beach Dec. 8 for its first district game of the season.

“I want them to take this as an opportunity to learn. We’re prepping for the Long Beach games. We’ve got all the players back, now it’s just about getting our form back coming back from Thanksgiving,” Williams said.

The Maroon Tide lost to Harrison Central 8-1 with Gunner Mitchell scoring the lone goal for Picayune.

Multiple players in the squad had been dealing with nagging injuries, so Head Coach Britton Fortenberry and his staff decided to rest a few starters Monday evening in order to let their injuries heal.

Picayune was down a couple goals in the first half, so Fortenberry told his players to come out and compete in the final portion of the game while trying to avoid more injuries.

“Essentially we rested a bunch of folks and got the young guys in there to get some experience, and their youth definitely showed. We came alive and played hard in the second half, and I was pleased with our effort in the second half. At that point, it was just about preserving our health and getting ready to play (in district games),” Fortenberry said.

Fortenberry’s squad will be taking on Pascagoula and Oak Grove as well this weekend.

Neither game will have an impact on the squad’s district standing, so Fortenberry is hoping his team uses the matches to get back in the groove they were in a couple of weeks ago before the injuries.

“For me it’s about fine tuning some things. Before going down with injuries, when we were at full strength, we were playing really well. I’m just looking for us to get back to the form we were at two weeks ago. We need to get better at set pieces, both attacking and defending heading into our first district matchup on Dec. 8,” Fortenberry said.