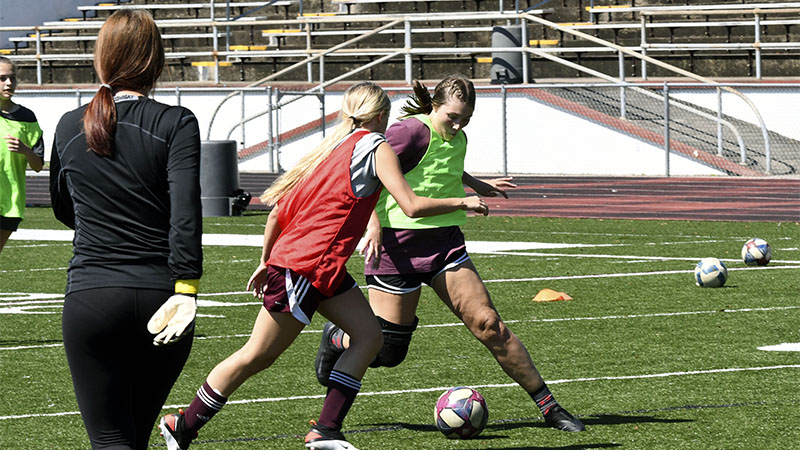 The Picayune Maroon Tide girls soccer team faced Oak Grove and Pascagoula in a tournament over the weekend and left with a tie and loss.

First up was Oak Grove. The Lady Maroon Tide fought but lost 2-0, before tying Pascagoula 1-1 in the following game thanks to a goal from Kaitlyn Williams.

Picayune has found goals hard to come by this season, and that was the case once again over the weekend for the Lady Maroon Tide.

However, Head Coach Ed Williams said his squad’s ability to battle against top tier teams from across the state bodes well for the future.

“We find a way to play with whoever we’re playing against, but without always playing our game. We’re still struggling to finish and defensively we’re getting close, but there’s still some little things to clean up,” Williams said.

Now the stakes are higher as Picayune heads into district play starting Dec. 8 against Long Beach at home.

While the team didn’t come away with wins over the weekend, Williams said the athletes are beginning to understand they have the talent to compete against tough competition, which will be useful when facing Long Beach.

“I think that really helped our confidence to play a good team with good players to see we can compete. We’re hoping that confidence and familiarity continues to grow as the season goes on,” Williams said.

Picayune has had several players in and out of the line up this year because of injuries or players having to quarantine due to COVID-19.

For some teams, all that change disrupts the chemistry between players and makes on field execution more difficult.

The Lady Maroon Tide hasn’t had that issue because the athletes in the squad have been playing together for years at the varsity level, so personnel changes don’t have catastrophic consequences on the team’s performance.

“We’re blessed that in our core group most of the girls have played together long enough by now that they kind of know (each other’s style of play). It’s all about being aware of who you’re playing with and how to play with them, and we’re getting close to that comfort level,” Williams said.

Moving into district, goals will be at a premium, even more so because goal differential can play a part in who clinches a postseason spot.

Williams’ players will continue working on finishing, and the hope is an early goal will settle the team’s nerves when taking on a talented Long Beach team.

“It would do a world of good for us if we could score an early goal and see the ball hit the back of the net. I think if we can do that a couple times in district, then I think we’ll settle into the game a little more. We just have to see balls go in the back of the net,” Williams said.

The game against Long Beach will begin at 5:30 p.m.