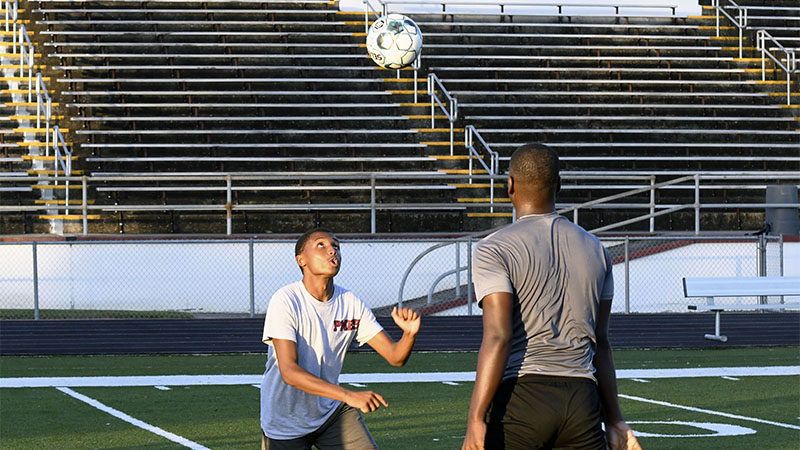 In The Air: Maroon Tide athletes work through a drill where players have to head the ball back and forth to each other. Photo by Jonathan Mitchell.

The Picayune Maroon Tide soccer teams took on Hattiesburg in a district match Dec. 11 that saw both teams emerge victorious.

The Lady Maroon Tide put seven goals past the Lady Tigers in an easy win for Picayune.

Head Coach Ed Williams is hoping the positive result, and plethora of goals scored, will help build some confidence among the players as they prepare for a district match against county rival Pearl River Central on Dec. 18.

Picayune has had several players miss time while in quarantine, and while the Lady Maroon Tide was still able to defeat the Lady Tigers last week, Williams knows things can change quickly as COVID-19 cases continue to increase in Mississippi.

“It’s just a recurring thing in the atmosphere we’re in. You know at some point you’ll be missing somebody. You’re just hoping it’s not the wrong person at the wrong time,” Williams said.

Prior to the Hattiesburg game, Picayune had been scheduled to take on Long Beach.

However, the Lady Bearcats had to go into quarantine, so the game will have to be rescheduled to take place after Christmas break.

That means whoever wins the matchup Friday night between Picayune and PRC will be in first place heading into the break.

Williams’ players know what’s at stake, but the team is working to stay calm and focused this week.

“We have to stick to our game plan and I think we’ll be alright. We do a lot throughout the year talking about that each game is a game of its own. It’s not going to put us in the playoffs or put us out of the playoffs. We can’t put so much stress on the game that it’s a make or break (match),” Williams said.

Picayune dealt with some line up changes against the Tigers but was able to pull out a 1-0 win thanks to a goal from Jamie Wilson.

A clean sheet to start off district play is a positive sign for the Maroon Tide even with several athletes playing in unfamiliar positions.

“We had to shift a bunch of kids around and we were missing two of our regular center backs. Considering everything we defended extremely well, maybe only gave up two shots the whole game. We kept things tight in the midfield and I was proud of the effort,” Head Coach Britton Fortenberry said.

The team now has to prepare for a game against PRC Friday night that could see the Maroon Tide start 2-0 in district play.

Given the possibility of quarantine and teams having to forfeit games, Fortenberry said getting two wins out of the first two district games would put his team in a strong position moving forward.

“We have an unknown with COVID so we could get into January and games may be getting cancelled. We don’t know how it’ll affect us. To be able to go 2-0 before Christmas break would really separate people and put you in the driver’s seat,” Fortenberry said.