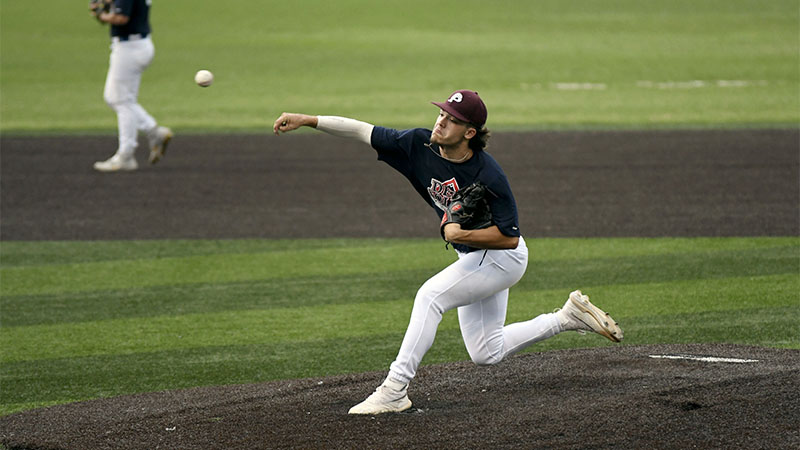 Former Player: Luke Smith pitches in a summer league game. Smith is one of the players the Maroon Tide will have to replace this year. File photo by Jonathan Mitchell.

Picayune Maroon Tide baseball is nearing full strength as athletes from other sports have been able to finally join up with the squad and begin practicing.

Head Coach Evan Nichelson said he’s still missing some players who are part of the ninth grade football team, but other than that the majority of his roster is ready and available for practice.

Prior to athletes from the varsity football team returning, Nichelson and his seven players were focusing on strength and conditioning.

However, over the past couple of weeks live batting and pitching have taken place as the athletes get in shape before the Christmas break.

“We wanted to make sure we got as many live reps as we could. We didn’t get a season last year, but we had a pretty good summer. I had all my guys this summer and they got a lot of reps,” Nichelson said.

There will be 12 freshmen on the varsity roster this year, so Nichelson is working to get the youngsters up to speed.

Some of the players have little to no experience on the varsity level, but the learning process will help the new athletes get acquainted with the pace and complexity of varsity baseball.

“I have a lot of new guys anyway, so it’s fun to see these guys I do have right now getting these reps. I can tell they’re growing up and maturing a little bit and they know it’s their time. They’ve worked really hard and I’m excited to see how they progress in January,” Nichelson said.

Several of the team’s seniors are part of the varsity football team as well.

The football players will bring grit and an expectation to win with them as they move from the gridiron to the baseball field.

“You want to make sure they’re getting in baseball shape, but playing Picayune football means they’ll bring that mentality over to the baseball field. You can’t replace that toughness aspect. They’re used to winning and have that winning culture. I think those guys are going to bring that element over to us,” Nichelson said.

There are a lot of inexperienced athletes moving up, but there’s also some veteran players on the squad who have played significant innings.

Nichelson said he’s hopeful they use their experience to take charge and lead the up and coming talent.

“Three of my seniors play football and they know it’s their team now, so they’ll step in and take the bull by the horns. A couple of these guys have played a lot of varsity innings for us. They’re used to being counted on and having a lot expected of them,” Nichelson said.

The team will continue to work in live situations before focusing on fundamentals the final couple of weeks before Christmas.

The season is only two months away, so the athletes need to get their arms back in playing shape before anything competitive can happen.

“I don’t have all of my guys right now, and you want to make sure their arms are in shape before you throw them out there. Let’s prepare to be ready for January, then once January gets here we can get after each other and get some scrimmage games under our belt,” Nichelson said.