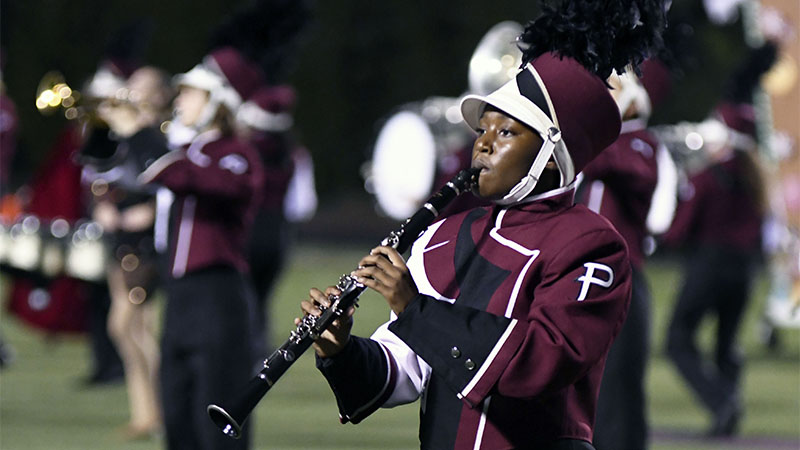 Moving Inside: The Picayune band is now transitioning from marching season to concert season as the cold weather sets in. Photo by Jonathan Mitchell.

A fall semester like no other is coming to an end for the Picayune band as the group rounded out 2020 with two performances.

The band had its Christmas concert on Dec. 3, but it looked a little different this year.

Originally the plan had been for the performance to take place outside so that community members could enjoy the show while still observing COVID-19 guidelines.

However, rain the morning of the event forced a change of venue as the band instead performed inside the high school auditorium.

The performance took place without a physical audience in the facility, but the concert was livestreamed to viewers throughout the county so they could still enjoy the holiday tunes.

Band Director John Cockrell said there were more viewers on the livestream than would normally come to the performance, and the band was still able to hold its annual basket raffle virtually this year to raise funds for the organization.

It was a strange situation to be in for the musicians as they performed in front of only a select few faculty who were in the auditorium running the livestream.

Transitioning from a performance in front of a boisterous crowd during a football game to an empty auditorium isn’t easy, but Cockrell said his musicians handled the situation well.

“After a song there’s no applause, but like we told the kids the audience is through that lens. They adapted very well. I think it was because we went over what that feeling would be like many times before (the concert). They didn’t walk in there blind,” Cockrell said.

Cockrell said preparation for the event, and the event itself, was similar to previous years for the most part.

Now that the parade has taken place the band will dive into concert season, which usually includes jazz band and honor band.

Cockrell said jazz band is an audition-based group with a slightly different ensemble that focuses on playing mostly jazz and rock music.

Honor band would usually entail students from across the state coming together to form a unit and competing with one another.

However, because of COVID-19 Cockrell said there’s no guarantee honor band will happen next semester.

Even with all the uncertainty, Cockrell is still going to make sure his musicians’ fundamentals are top notch.

A concert evaluation of some variety will take place next semester, and Cockrell wants his musicians to be ready.

“What we’re doing right now is going back to music fundamentals like scales, tone quality, balance of the whole ensemble. We want to have (an evaluation). We want everything to be as normal as possible, but if we don’t have one I have some ideas of what to do,” Cockrell said.