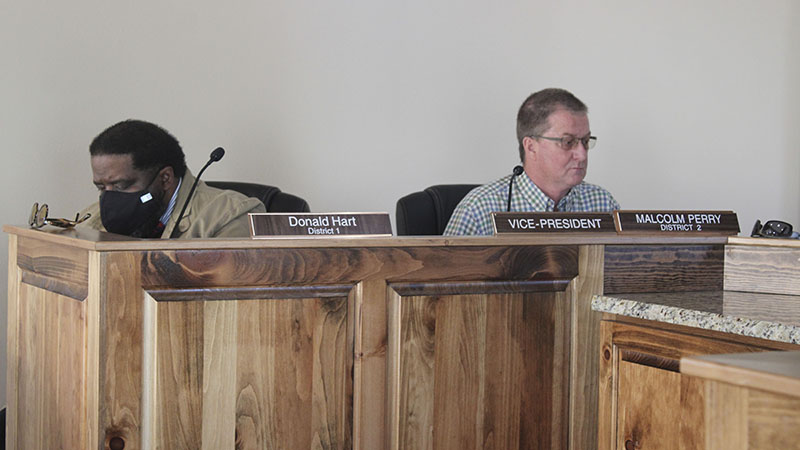 District I Supervisor Donald Hart and District II Supervisor Malcolm Perry listen and review documents during a Board meeting Monday.

Ambulances in the county may soon have additional radios to communicate with medical responders who are already on the scene of an accident.

During Monday’s meeting, Emergency Management Director Danny Manley told the Pearl River County Board of Supervisors that the county recently acquired six new radios via a grant program at no expense. The radios only have medical channels to give many first responders with EMS training a way to communicate with ambulance personnel that are en route to the scene of an accident or other medical emergency. It could be especially helpful in mass casualty incidents, he said.

Manley said he is not sure if AAA Ambulance will want to use the radios, but he thinks it is the best use for them logistically, so the Board approved giving the radios to the ambulance service.

In a separate matter, the Board also approved several grants and purchases for volunteer fire departments in the county.

They approved executing a grant for the Nicholson Fire Department to help purchase a fire truck.

—Acknowledged monthly reports. In November the Department of Planning and Development and the Building Division issued 158 permits, generating $25,455 in revenue. Of that total, 23 permits were for residential construction.