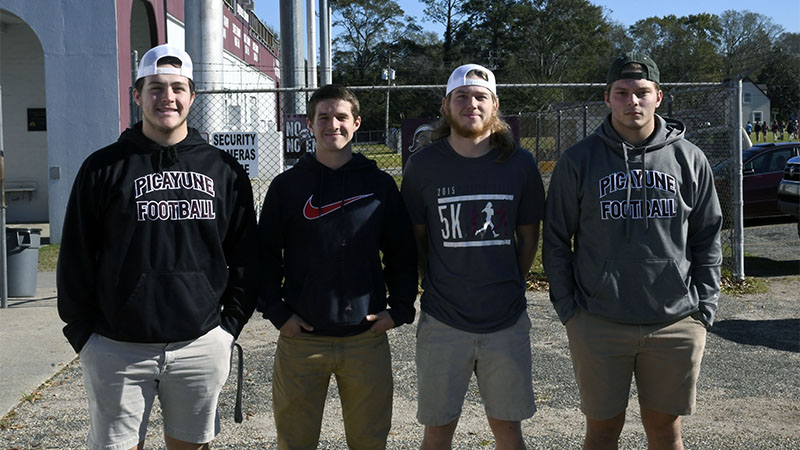 Picayune football always has championship aspirations, and although the Maroon Tide didn’t win any hardware this season, there were several players who were recognized for their performances on the field.

Picayune wanted to bring home a state championship, but were bounced out of the playoffs in a hard fought game against West Jones that ended 35-23.

Hunter said even with the early exit, the season still had its positives.

“We definitely had higher expectations, but I’m not ashamed of it. I’m really happy I got to spend it with my best friends this season,” Hunter said.

As a junior, Jones is the only Picayune athlete named to the All-MVP team that’ll be returning next season for the Maroon Tide’s varsity football team. The defensive lineman said he’ll continue putting in the work this offseason in the hopes of making the jump to college ball after his senior season.

“I want to break a lot of goals. From where I’m from, you don’t see a lot of people go to college and stay there. They’ll get in trouble or something, so I want to break that curse and keep playing ball,” Jones said.  Players had to get used to new routines this year as the team used stringent COVID-19 guidelines to keep the athletes safe.

However, even with all the changes being made, the game itself wasn’t altered and Hickman took full advantage of that.

“I’m just really thankful that for my last year we had a good year. This year may not have ended how we wanted, but I had just as much fun this year as I did last year. Being on the field a lot, I wouldn’t have it any other way. After a game, win or lose, when I’m dog-tired there’s no better feeling,” Hickman said.

Four of the athletes are seniors who have played their final game in a Maroon Tide jersey.

The reality is hard to come to terms with, but the veterans are hopeful they set a good example for the younger guys moving forward.

“Even when we have to go through trials, it’s still possible to do special things. This year was hard for everybody not just us. COVID is around the world, not just here. I think this year, the seniors, we left a good legacy of not giving up. That whenever hell strikes, to just keep on pushing and I think we did a really good job of that,” Penton said.

Football is a team sport where 11 guys have to do their job perfectly to be successful.

However, to be recognized as an individual is an honor the players don’t take lightly.

“To me it’s just another way of showing younger guys what leadership is about, what putting in hard work is about. It gives them something to strive for. They’ll say, ‘He put in the work. He said this every day, he did this even when it was hard.’ Hopefully they’ll catch on to that and one day Dorian Robinson or Dante (Dowdell) will be in the same spot,” Samples said.

There’s a motto Picayune players live by, a mantra that’s drilled into every athlete’s mind.

It’s a message that applies to the sport of football, and life as well.

Penton said the lessons learned as a Maroon Tide football player go beyond the field, and that’s what makes the program so special to him.

“It means everything to me. It’s more than just learning something in high school, it’s a life motto. You live with mental toughness. Everybody knows this world is not something you can live in without having a strong mentality, and if you give that throughout your whole life, no matter if you’re 20-years-old or 80-years-old, you’re going to do something with your life,” Penton said.