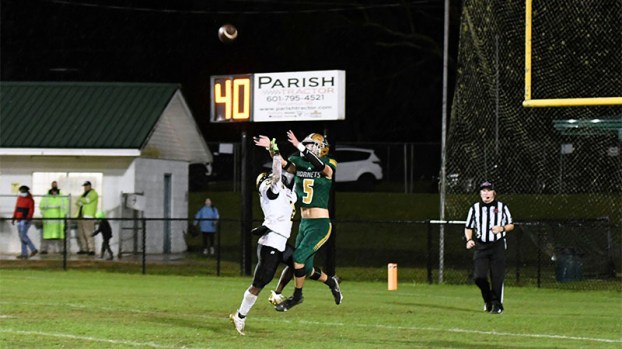 Rising Up: Wide receiver Torry Polk elevates over a defender in an attempt to catch a pass during a game last season. Photo by Jonathan Mitchell. 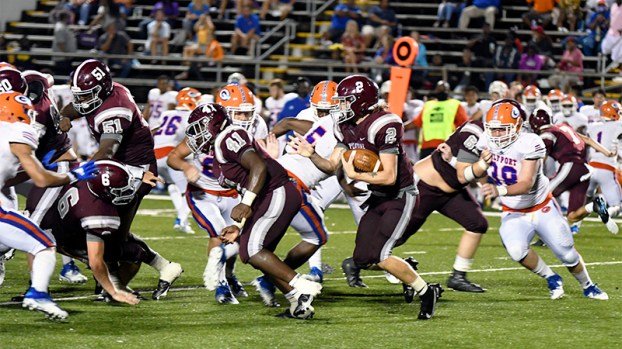 The Bernard Blackwell All-Star Football Classic pits the best Mississippi players against one another in a North vs South format, and Picayune Maroon Tide player Austin Samples and Poplarville Hornet Torry Polk both earned a spot on the South’s roster this year.

The match up will take place Dec. 19 in Brandon, Mississippi and will feature athletes from all over the state in a battle to see whether the north or south boasts the best football players.

This year’s match up will be the 72nd iteration of the game, and Samples said this opportunity will take on a little more meaning as the senior represents Picayune football for the last time.

“It’s going to be pretty exciting and I’m going to get a lot of experience out of it. It’s a blessing and a curse because it’s going to be my last game as a high school player, but it’s also a blessing because I get to meet all these guys who are putting in the same work I have,” Samples said. Nerves won’t be an issue for the Polk, even on the big stage. Polk has played in every type of game imaginable with the Hornets, including multiple state championships.

The mindset he takes into every game won’t change this week just because of the caliber of competition. “I think (the experience) will help a lot. At Poplarville we play on big stages all year. We usually start the season at Picayune or D’Iberville, against big schools with a bunch of people there. I’m just going into it as just another game and I’m going to do what I do,” Polk said.

After a season like no other, Samples is hoping to have one final send off before his high school football career ends. The Maroon Tide always has championship aspirations, and although those dreams didn’t become a reality this year, Samples said this All-Star game will serve as a way to end his time on the gridiron with another strong performance.

“I didn’t have much of a great last game, so I wanted another experience to play the game I love and possibly make some new friends. Maybe the college I choose to go to I’ll have one of those guys there as well. It’s just another experience that when I get down the road and I’m older I can say I played in this game. One day I’ll be able to look back on it and be glad to have had a chance to play in it,” Samples said. Appearing in the All-Star game not only speaks to the caliber of players Poplarville produces and Polk’s own hard work, but can also serve as inspiration for younger athletes.

Work ethic is the great equalizer when it comes to football, and Polk said he’s hopeful playing in the showcase will help people understand the impact the program had on him.

“Poplarville football means everything to me, it’s been my entire life. I love these boys and these coaches. They’ve devoted so much time to this. It’s amazing here in Poplarville. We’re a huge family and I wouldn’t trade it for the world. These have been the best four years of my life. It’s life changing,” Polk said. The game will only be available for broadcast via Internet stream from Friday Night Under The Lights at fnutl.com or the MAC Network on the web site at mscoaches.com/mac-network/livestream.