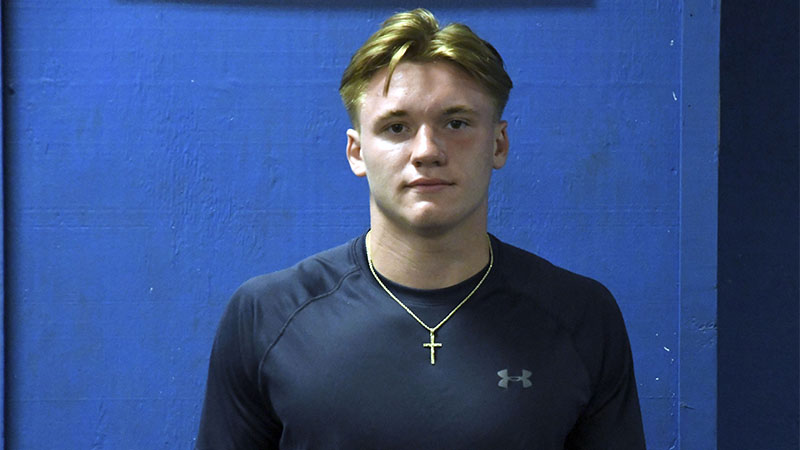 Leader: Senior Brady Johnson has tried to show underclassmen the best way to go about their business as a veteran of the basketball and football teams. File photo by Jonathan Mitchell.

Brady Johnson has spent years competing at the varsity level in track, football and basketball for Pearl River Central and if there’s anything he’s learned it’s how to overcome obstacles.

Coaches harp on the importance of fighting through any challenges that might present themselves during a season, and those messages have stuck with Johnson.

“I keep going back to adversity. I’d say that’s the biggest thing they’ve taught me, and that’s going to help me further in life. You put on your blue collar and go to work. Adversity is always going to come in a bunch of different ways, so you have to figure out how to overcome that adversity,” Johnson said.

Not only have the coaches had an impact on his life, but so has the PRC community as a whole.

Johnson is used to playing in front of a cheering, supportive crowd at every home game, and that rush of adrenaline getting ready to compete in front of rabid fans can’t be replicated.

“There’s no type of feeling like going out there on a Friday night or onto the court. I feel like the fan base at PRC is like no other. Win or lose, they always support us. I love the PRC community, Carriere,” Johnson said.

The senior has been playing basketball and football since he was in second grade, then took up track his freshman year of high school.

Along the way there have been countless teammates, both former and current, that have left a mark.

Johnson said part of being a veteran player is to lead the up and coming athletes when the going gets tough, and that was certainly the case this year as the world dealt with the coronavirus pandemic.

“I feel like my teammates are like a brotherhood. I love all my teammates and I’m glad that this past year I could try to be a good leader for them. When you’re a senior all the underclassmen look up to you and the best thing you can do is lead them, set a good example. I try to bring a lot of energy because it’ll carry over to them,” Johnson said.

Johnson is currently competing with the Blue Devil basketball team as the season is in full swing, but there are times he reminisces on what he’s done throughout his high school athletic career.

PRC’s athletics have been a part of Johnson’s life for the past four years, and to see that come to an end is hard to fathom.

“It’s crazy to think it’s about to be over, that I’m not going to be a PRC football or basketball player anymore. With football it was weird because I didn’t have time to sit there and think about (the fact that) it’s over because I went straight into basketball. Now, I’ll just be driving, thinking sometimes like, ‘I’m really never going to play for PRC again,’” Johnson said.

There’s still several months and multiple games to take part in before Johnson’s senior year will end, and the future is looking bright as the veteran hopes to play football at the next level if an offer comes in from a college or university.

Most popular sports stories in 2020