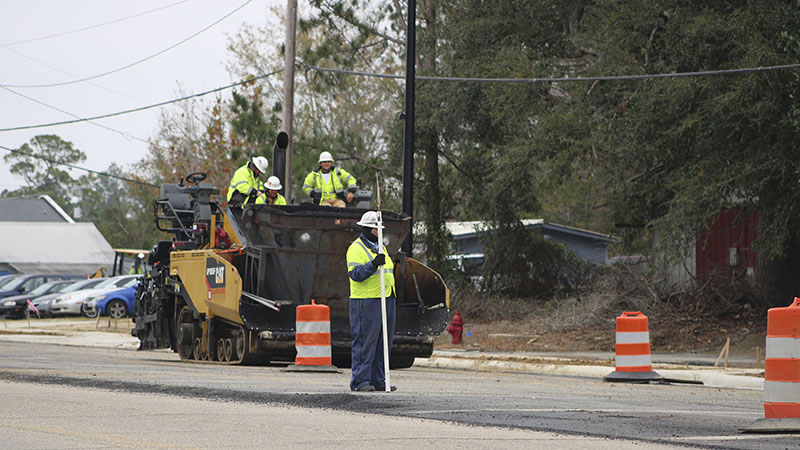 Lane Transition: A crew with Barriere Construction stages equipment being used in the ongoing Highway 11 widening project within Picayune. Plans to shift the project from the east side of the roadway to the west side have been delayed. Cathy Cook | Picayune Item

Work on the Highway 11 widening project is behind schedule. Roadwork may not switch from the east side of the highway to the west side until after the start of 2021.

Work on the east side of Highway 11 has been ongoing for most of 2020. Road work was supposed to transition to the west side of the highway in mid-December. With asphalt paving behind schedule, the transition from one side of the highway to the other is currently planned to be completed between Christmas and New Year’s, but may not be completed until after 2021 begins, said Mississippi Department of Transportation Engineer Dexter Childs.

Some of the operations took longer than projected and cold weather put the project a few days behind, said Childs.

Asphalt paving is limited by temperature. With the thickness of the asphalt being paved, the workers typically need the temperature to be 45 degrees and rising, said Childs. Some mornings that threshold is not met until 9:30 or 10, preventing workers from getting started until the temperature is ideal.

“There will still be typical congestion. It won’t be impacting traffic near as much as we are now,” said Childs.

Barriere Construction has a $14.4 million contract to widen Highway 11 to four lanes from Cayten Street to Lakeshore Drive, according to previous coverage. At its earliest, that work will not be complete until the end of 2021. A second phase is planned, which will include replacing the bridge over the East Hobolochitto Creek. That work will be under a separate contract.

Picayune locals are growing frustrated with the ongoing roadwork. A meme where a little girl asks Santa for Highway 11 construction to be complete, and he offers to get her a unicorn instead, has been shared on social media more than 200 times.

“When we go through these major intersections it can be pretty inconvenient because we have to stop traffic temporarily and it’s a pain, but I would just say continue to be patient and we’re trying to move through these intersections as fast as we can,” said Childs.

The 19-millimeter asphalt base lift is down for the east side of the highway, and Childs estimates 90 percent of the binder lift is also down. Paving on driveways and side roads will begin over the next couple of days.

Creel will not seek reelection