Creel will not seek reelection 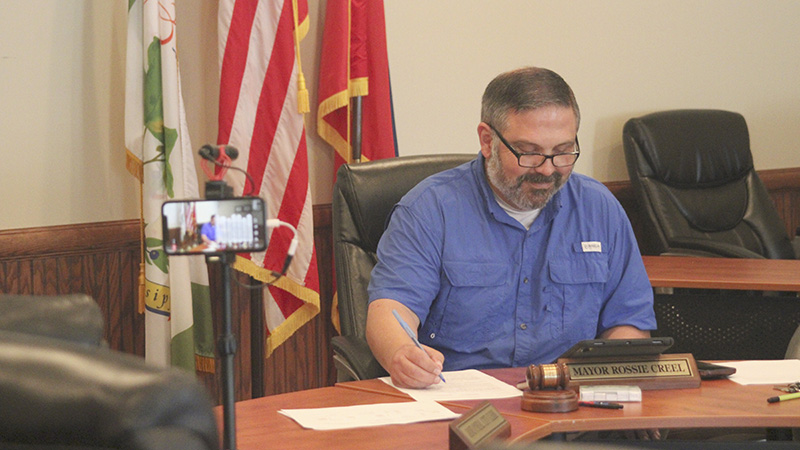 Poplarville Mayor Rossie Creel leads a Board of Aldermen meeting earlier in the year. After decades in public service, the most recent of which as Mayor of Poplarville, he will retire and not seek reelection. File photo by Cathy Cook.

Creel was elected in 2017 to a term that will end in June 2021. Along with being Poplarville’s mayor, he also works as the Director of Transportation for the Poplarville School District.

Creel will also retire from his job with the school system. To retire from the state retirement system, he has to retire from all jobs that contribute to the system, which includes his elected position as mayor.

Creel told the Item that the pandemic has made him reprioritize things in his life. Creel, his wife and daughter all had COVID-19 in August and had to quarantine, according to previous coverage.

“I’ve always been told, you’ll know when it’s time to go, and I believe that. I feel it in my heart,” said Creel.

“Public service wasn’t really something I did on purpose,” he said. “It just kind of happened. I was in college and got overwhelmed with that and ended up dropping out of college at the time and going to work for the sheriff’s office, as dispatcher.”

Creel said he is grateful to have had a career that kept him in his hometown for most of his adult life, since many people have to leave Poplarville to find work opportunities.

“I served a community that served me my whole life.”

Creel said he has accomplished many of the projects he set out to accomplish when he was elected, like improvements to the Town Green and street paving and infrastructure improvements he and the Board of Aldermen have completed.

The city completed a large paving and drainage project this year, funded by a 2019 general obligation bond. Some streets had to be cut from the project because more of the funds had to be devoted to the extensive drainage work that needed to be completed after years of not being maintained. But the Board does plan to use Internet sales tax to continue paving streets in the future, said Creel.

One thing the Board and mayor have not accomplished during Creel’s term is building a recreational facility or basketball court in one of the town’s neighborhoods, but he’s still hopeful the city will find funding for it.

“That was one thing that we’ve talked about for three and a half years… the right funding and opportunity hasn’t presented itself yet, but hopefully we can make it happen before June, before the end of all our terms.”

Creel’s youngest son will begin his senior year as a Poplarville football player in fall 2021. After years of working during football games as a school resource officer or volunteering as a coach when his sons played youth sports, Creel is excited to cheer his son on from the stands.