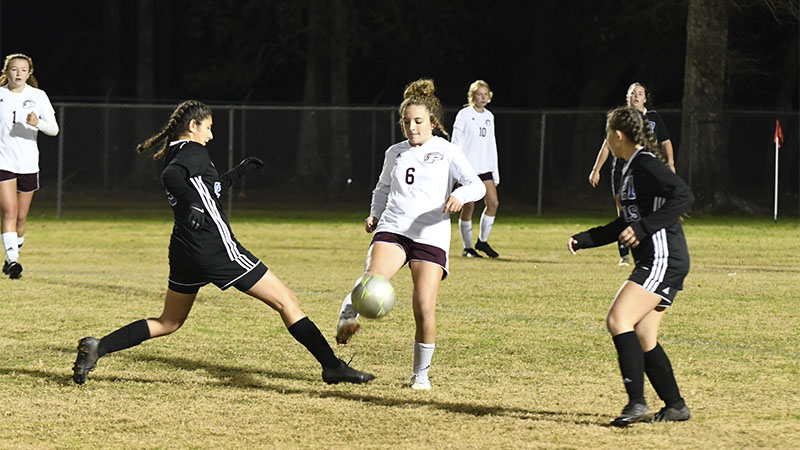 Close Game: PRC and Picayune players fight for possession of the ball in the middle of the pitch. Photo by Jonathan Mitchell.

The Pearl River Central and Picayune soccer teams faced off Dec. 18 and the chilly evening ended with each team winning a game.

The Lady Maroon Tide and Lady Blue Devils were evenly matched, so much so that the game went into overtime before finally being settled with penalty kicks.

PRC forward Anna Grace Atwood found the back of the net with just seven minutes remaining in the first half to give the Lady Blue Devils a 1-0 lead.

However, just two minutes into the second half Picayune equalized through a score by Abby Davis to tie the game at one apiece.

The game then went into overtime and Alyssa Fleming scored off of a corner from Leigha Trahan with five minutes remaining in the first overtime period to give the Lady Blue Devils a 2-1 lead heading into the second period.

It looked like PRC was going to take the win, but in the dying moments of the game Kaitlyn Williams scored for the Lady Maroon Tide to tie the game back up.

The two teams then went into penalty kicks, and after two misses by the Maroon Tide, Fleming drove home the final penalty for PRC to win the game and move to 2-0 in district play.

PRC Head Coach Joe Weems said his team’s poise during the overtime period and penalty kicks would serve as a confidence boost for his players as the Lady Blue Devils chase a playoff berth.

“The win showed them that even when things are going great and then go south, that they can still make it work. I was extremely ecstatic with the way the ladies played,” Weems said.

Picayune Head Coach Ed Williams said his side played well enough, but just wasn’t quite able to pull out the win.

However, coming down from a goal twice bodes well for the Maroon Tide as the team showed it was capable of fighting back from a deficit.

“We didn’t quit. I was as proud of the fact that we didn’t quit as anything. When you have that type of resilience and that type of no quit attitude you can come back from detriments. They have to keep perspective on things. You can’t let emotions get too high too low,” Williams said.

Picayune was able to use a quick start to seal a 3-0 victory over the Blue Devils with Danny Moore having a brace and Vincent Acker finding the back of the net for the Maroon Tide.

Picayune Head Coach Britton Fortenberry said his players did a good job of handling the pressure and emotions that come with playing the Blue Devils in an important district match up.

“It’s always super intense and emotional when we play them because they are our county rivals and they always play us tough. It was all about coming out and keeping composure and executing some of the things we wanted to do in the game. I think they handled it well. They knew the importance of this game, especially for us as far as seeding and taking control of the district,” Fortenberry said.

The game was the final one for the Blue Devils before the team travels to take on the D’Iberville Warriors Jan. 5 in a non-district game.

Weems said since his players have been practicing for five months straight and playing for the last two months that the Christmas break practices will take a less intense approach.

“We’re going to try to bring some excitement into the second half of the season. A lot of teams will start registering some burn out at this point of the year, and we don’t want to add to that,” Weems said.

Picayune’s next game will also be on Jan. 5 at Columbia with the girls starting at 5:30 p.m. and the boys following at 7 p.m.