Cases for Chromebooks approved by Poplarville School Board 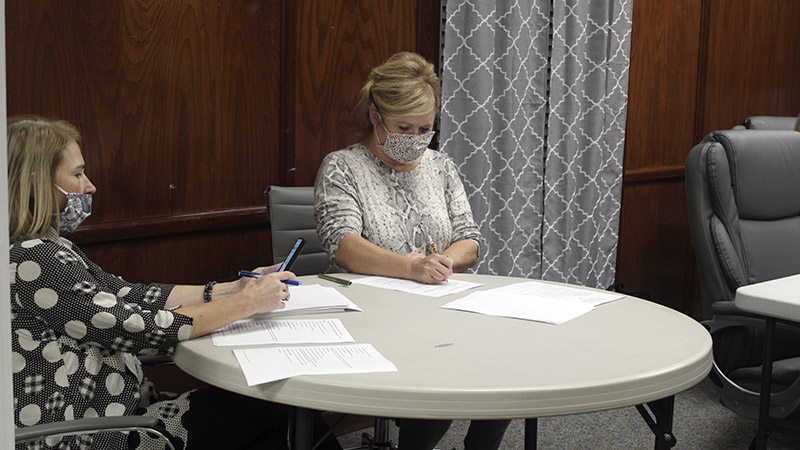 At left, Poplarville School District CFO Samantha Sandifer comes to Board meetings prepared to answer any financial questions the Board has. The Board approved October’s financial reports at their regular meeting Monday.

The Poplarville School Board discussed technology fees and spending CARES Act funding during the final meeting of the semester Monday.

The Poplarville School District had approximately $5,000 remaining in federal CARES Act funds, which have to be spent before the end of 2020. At the recommendation of the superintendent, the Board approved spending the funds to purchase covers for tablets and Chromebooks.

The district has received approximately 1,550 Chromebooks, purchased with CARES Act funding, said Superintendent Konya Miller. The district charges the families of students a yearly insurance fee of $30 associated with Chromebook usage. But since the laptops did not arrive until the end of the fall semester, the district approved reducing the fee to $15 for the spring semester, instead of charging the full $30 fee.

In a separate matter, the Board approved demolishing the parenting center, a structure located in between the middle and high school. The structure had previously sustained damage, and given the limited space it provides, repairing the building was not worth the cost, said Superintendent Konya Miller.

The district looked into contracting someone to demolish the property, but discovered it would be more affordable to use the district’s maintenance department to complete the demolition, said Miller.

District administrators are not sure yet what the land will be used for long term or if another structure will be built there, but there are plenty of student groups and activities that can use the land for practice. The district will create another comprehensive plan to determine how to use the space after things settle down with COVID-19.

—Accepted the resignation of one bus driver and approved the termination of a second bus driver. The driver who was terminated was a no call, no show, said Miller.

—Approved two 16th section land lease agreements with Falling Water, LLC for hunting and fishing. One lease is for 219.62 acres and the other is for 294 acres.