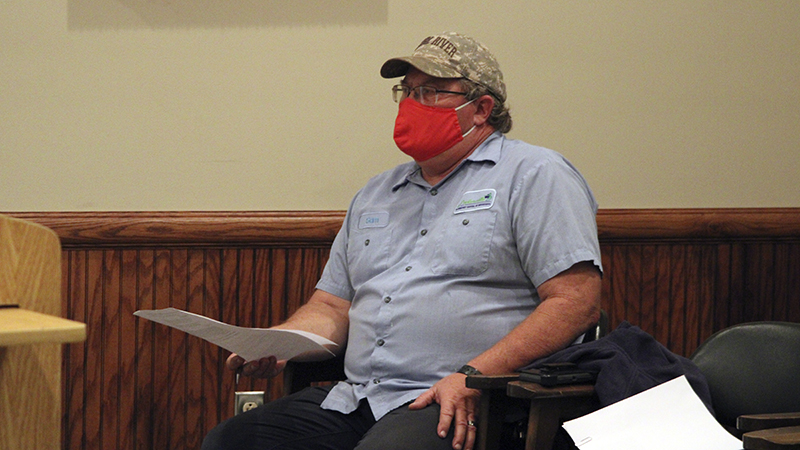 During the Poplarville Board of Aldermen meeting Tuesday, Public Works Superintendent Sam Hale was recognized for his department's work to place the city's Christmas decorations. Photo by Cathy Cook.

The Pearl River County Sheriff’s Department helped staff the Poplarville Fire Department while firefighters had to be quarantined due to COVID-19.

Creel said it is difficult for a small fire department when all of the firefighters have close contact with someone with COVID-19 or were personally infected with the virus.

The Sheriff’s Department provided the fire department with three deputies to help out, said Bannister.

“They helped us out tremendously,” he said.

Few of those involved in the discussion were physically present in the boardroom, since several Board members and Bannister attended via video conference.

In a separate matter, the Board of Aldermen appointed a new member to the Poplarville School Board of Trustees. Heather Holliday was appointed for a five year term, beginning in 2021.

The Board decided not to reappoint Jason Baker, who was appointed in December of 2019 to complete Tommy Strahan’s term. His term ends Dec. 31, 2020. Board of Aldermen members decided they wanted to appoint someone who lived within the city limits. Although Baker lives within the school district, he moved outside of the city limits earlier this year.

Board of Aldermen members Daniel Brown and Anne Smith said they’d like to discuss setting a precedent that the two city appointed School Board members be residents of the city in an upcoming meeting.

Creel recused himself from the discussion because he is a Poplarville School District employee.