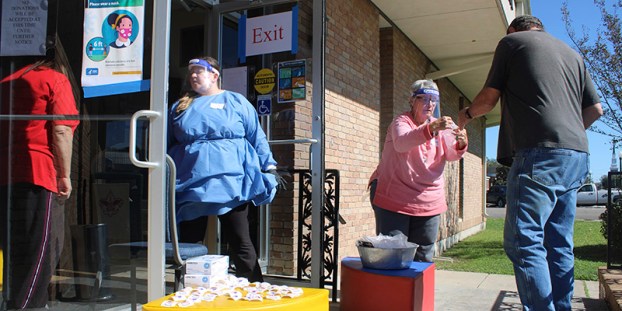 Unofficial results from Tuesday’s election were released by the Pearl River County Circuit Clerk’s office Wednesday afternoon. The presidential race has not been called as of press time Wednesday.

The referendum passed statewide, so Mississippi will have a new flag design, featuring a magnolia bloom and the words “In God We Trust.”

Initiative 65 passed based on statewide results.

This ballot measure also passed statewide, amending the state constitution to eliminate a process that allowed the state House of Representatives to choose the winner in a statewide race if neither candidate won both the majority of the popular vote and the majority of House Districts.

The AP called the race for incumbent Cindy Hyde-Smith.

Mike Randolph ran unopposed in the nonpartisan judicial election for Supreme Court Justice in the Supreme Court District 2 and received 18,524 votes, 98.81 percent. There were 223 write-ins, 1.19 percent.

Circuit Clerk Nance Stokes said that her office was still awaiting receipt of 230 absentee ballots on Tuesday. To be counted, those absentee ballots have to be postmarked by Tuesday, Nov. 3 and must be received by Nov. 10.