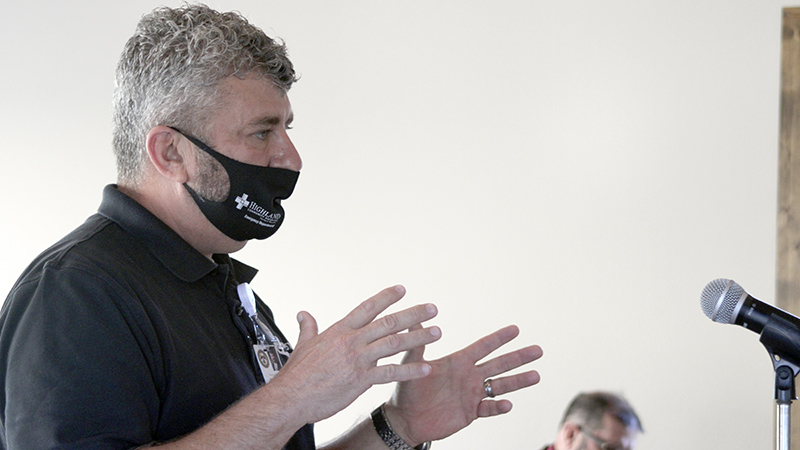 Coroner Derek Turnage said the number of deaths he works has increased along with the county’s population size. Photo by Cathy Cook

The now vacant building that previously held the Pearl River County Tax Office in Poplarville is going up for sale.

The Pearl River County Board of Supervisors approved declaring the building and lot as surplus property and advertising it for sale. Bids will begin at a minimum of the appraised value of the property.
In a separate matter, the Board approved hiring a full time office manager for the Pearl River County Coroner’s Office.

Coroner Derek Turnage said his office has been plagued with complications due to COVID-19 and has unfortunately been without an office manager for three months.

Previously the position was part time, but Turnage asked the Board to hire a new office manager as a full time employee because the average number of death calls has increased, along with an increase in the county’s population. Recently the office has been receiving an average of 50 death calls per month, said Turnage.

In a separate matter, the county will purchase four new ¾ ton crew cab trucks for the maintenance department at a cost of $26,498 per vehicle.
County Administrator Adrain Lumpkin said that if the county orders the trucks now they will not arrive until March and some of the department’s trucks are already having troubles.

—Approved paying an additional $100 to the Resolution Board members, who worked an additional day, Wednesday, Nov. 4, in the general election. The additional day of work was needed due to the large number of absentee votes cast, according to a letter from Circuit Clerk Nance Stokes.

—Approved issuing checks to 186 poll workers, for a total of $40,647 for their work on Election Day.

—Approved a payment to Precision Construction, LLC for $97,682, the first payment on a $323,006 contract to replace a bridge on Troy Dedeaux Road. The bridge replacement is being funded with state ERBR funds.

—Reappointed Don Welsh to the Pearl River Community College Board Of Trustees.