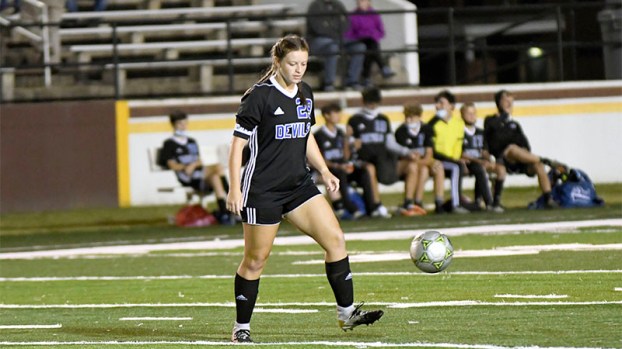 First Touch: Taylor Lancon tries to control an airborne pass prior to a recent game. Photo by Jonathan Mitchell.

The girls game ended with the Lady Blue Devils taking home a 3-0 victory thanks to goals from Monica Caro, Alyssa Fleming and Anna Grace Atwood.

The boys team pummeled the Tornadoes in the following matchup, winning 5-1.

Brant Tarter scored two, Holdon Dodd added another pair of goals and Norman Oseguera rounded out the list of scorers for the Blue Devils.

The Lady Blue Devils were coming off a loss the previous night to the Poplarville Lady Hornets, so the positive result against Purvis was a good way to rebound for the young team.

“They played better against Purvis. We’re not anywhere near satisfied, but they definitely corrected some of the things they did wrong (against Poplarville), which was positioning and working the ball to the outside a little more,” Head Coach Joe Weems said.

PRC is only two games into the season, and finding a leader to take charge on the field is still a work in progress.

The Lady Blue Devils are young, so right now the senior players are having to carry the load when it comes to leadership roles.

“The seniors are leading by example, but it’s pretty much a team effort. I don’t have anybody that’s taken on that responsibility,” Weems said.

Weems was hoping for a better showing from his boys team against an overmatched Purvis.

Even though the Blue Devils won with ease, Weems said the team’s play during the game was anything but calm.

“The first half was just chaos. We didn’t hold our shape and we were panicking with the ball. There were a lot of issues from the night before (against Poplarville that were still there). We’re still missing three starters, but that’s not an excuse,” Weems said.

The group has a lot of inexperienced players who haven’t competed in varsity action together before.

Weems said this has led to more players acting as individuals, instead of focusing on working together as a group.

“They need to start thinking about team play because it still looks like chaos for our guys. We’re having to do more work than we should. We’re getting beat up instead of playing disciplined soccer, and we’re causing our own problems,” Weems said.

However, a win is a win, and both teams will look to build off the performances against Purvis as they head into practice this upcoming week.

The next varsity matchup will be against the Laurel Golden Tornadoes on Nov. 12.