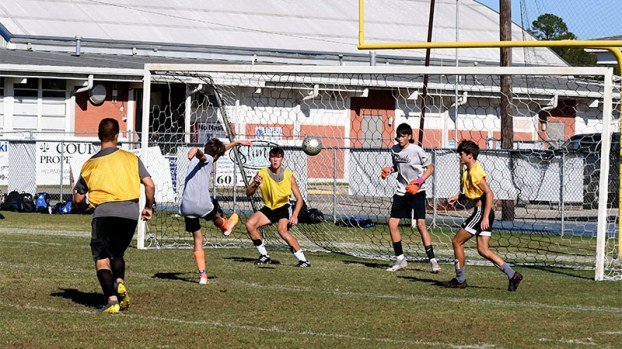 Off The Corner: The Blue Devils worked on scoring from corner kicks during a recent practice as the team gets used to the spacing of its home field. Photo by Jonathan Mitchell.

PRC soccer continuing to progress with each game

The Lady Blue Devils won their matchup 6-3, while the boys team tied 2-2.

It was a group effort from the Lady Blue Devils that enabled them to defeat Laurel.

After taking a 2-0 lead into halftime, Laurel started the second half with a lot of pressure and was able to score three consecutive goals to take a 3-2 lead.

However, the Lady Blue Devils settled down and were able to score four goals unanswered to secure the win.

Alyssa Fleming, Alyssa Liddell, Monica Caro and Leigha Trahan all found themselves on the score sheet for the Lady Blue Devils.
Head Coach Joe Weems said the athletes did a good job of calming down and dealing with the pressure applied by the opposing team during the win.

“They were able to be mature enough to settle down, reset yourself, regain control and score four more goals. That’s really a big deal because we would not have done that last year. It says a lot about what our potential is,” Weems said.

Fleming has been a good attacking option for the Lady Blue Devils this year with several goals already to her name.

However, the team’s ability to put the ball in the back of the net comes not from just one player’s talent alone, but because of the chemistry between the attacking players.

“This year has a different feel. They’re supporting each other and there’s an energy around them. I feel like the whole supporting cast is more mature, a little more focused and working a little harder,” Weems said.

The boys team battled to a 2-2 draw in a physical matchup.

Grant Malcolm and Chris Hart found the back of the net for the Blue Devils as they dealt with Laurel’s physicality.

The tough nature of the game meant the athletes were starting to fatigue as the match neared its end, which Weems said is something his players still have to work on.

“We played well to the end, but I could tell the guys were starting to suck wind. We’re going to have to get our legs under us. In practice they’re tired after games and we’re having to push them harder to make them produce in practice,” Weems said.

The team hasn’t had a game on its home field this year because of scheduling conflicts and away games, but will finally play on home turf Monday against Harrison Central.

Seeing as the team’s field is slightly narrower than an average field, the players have been spending a lot of practice time getting accustomed to the space they’ll have to play within.

“We’re used to a huge amount of space and now have to move to a space that’s more confined. We’ll go over corners and free kicks to get them acclimated to the smaller size,” Weems said.

PRC will take on Harrison Central Monday night before hitting the road again Nov. 20 to take on the Hancock Hawks.

Picayune golfer ready to move to next level

Cameron Guidry has been swinging a golf club since the day he could walk, and saw his years of dedication... read more