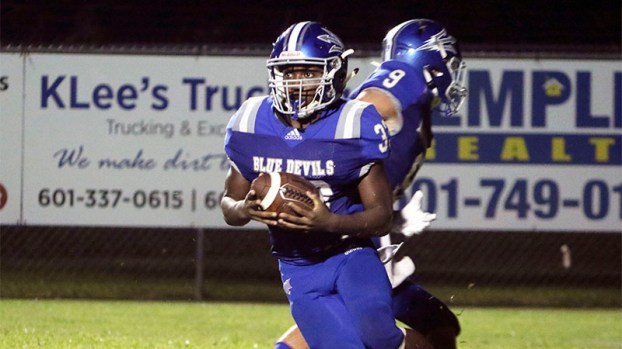 Bright Future: Sophomore running back Destin Coleman takes a hand off and surveys the field. Photo by Jeremy Pittari.

PRC preparing to end the season on a high note

PRC was eliminated from playoff contention prior to the matchup with East Central, but the Blue Devils took the field that night wanting a win.

A victory against East Central last Friday and a win this week would’ve allowed PRC to end the season with its best record under Head Coach Jacob Owen.

Instead, the Hornets showed why they’re competing for the district title this year, and Owen said his team needs to get better at fixing problems each week without letting them resurface against multiple opponents.

“We’ve made some of the same mistakes repeatedly and that falls on me. I have to do a better job,” Owen said.

This week the Blue Devils will take on the Gautier Gators in what will be PRC’s final game of the season.

The game will also serve as senior night for the Blue Devil players as the elder statesmen of the team will be celebrated for their contributions to the program.

Owen hopes the unprecedented circumstances this class of seniors dealt with this season have offered lessons that they can use later in life off the field.

“We’re always going to have a special relationship with our kids. We want our kids to know we love them and that we’ll always be here for them. I’ve had this group of seniors since they were sophomores and I’ve gotten really close to a lot of them. I hope that when they leave here they understand what it takes to be a winner. Not just in football, but in life,” Owen said. Seeing as this week’s game will be the final one of the season for the Blue Devils, PRC has nothing to lose.

Owen said he wants his athletes to play with passion and belief when the Blue Devils take on the Gators, and if they do that a win might be the end result.

“I want our guys to go out there and play for four quarters as hard as they can, and don’t get down if something bad happens. Continue to believe in each other, the coaches and what we do offensively and defensively. That’s what I would love. If we do all those things we’ll win,” Owen said. The game against Gautier will be at home for the Blue Devils and kickoff will take place at 7 p.m.