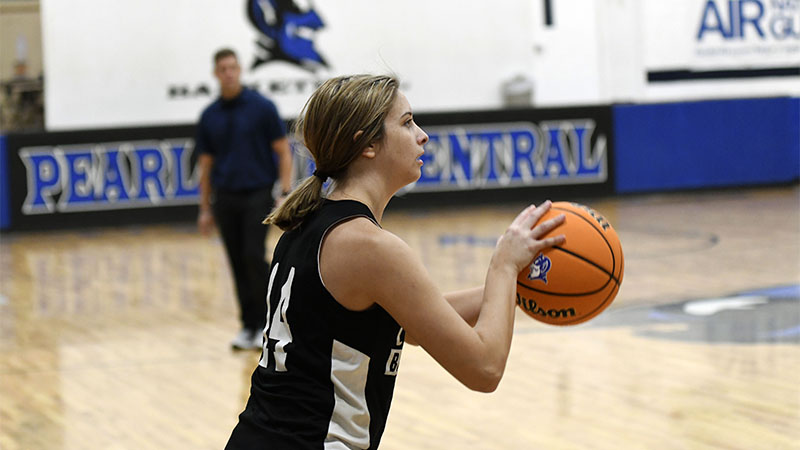 Getting Shots Up: Junior Brennyn Dossett practices her three point shot during a recent practice. Photo by Jonathan Mitchell.

Jada Lindsey led the Lady Blue Devils with 16 points, 8 rebounds and a block while Hannah Mitchell pitched in another 14 points for PRC in the win.

There are only two seniors on the squad, Lindsey being one of them, so there were some pregame nerves from the young team to start the game.

However, Head Coach Cliff Bauer said his team’s chemistry and familiarity with each other on the court minimized the impact of those jitters.

“There were some nerves, just like for any athlete there’s generally going to be a little bit of nerves. For the most part this young group has played together for so long (it didn’t affect them),” Bauer said.

The basketball season is four months long and includes a high number of games, which means if an athlete was to be out for an extended period of time they’d likely miss multiple games.

Because of COVID-19 policies there could be any number of athletes having to quarantine on a weekly basis, and that could affect Bauer’s starting line up and bench depth.

In preparation for that eventuality, the team has been making sure all athletes are ready to step up if needed.

“It’s very important to have depth and one thing I’m learning is there are some things that are out of our control. I guess, now more than ever, you have to be expecting a student athlete to be out of a game and be prepared to have someone ready to fill in,” Bauer said.

The team has altered its offensive and defensive schemes compared to last year, and it’s been a learning process for the athletes.

A big emphasis for the current Lady Blue Devil team is pushing the ball down the court and hitting teams on the break.

This requires not only snapshot decision making from the players but also good conditioning, which is still a work in progress.

“The kids, even against Seminary, were getting completely winded and we run every day. It’s just a mental battle of conditioning. Getting the kids to run up and down like that is going to be a challenge,” Bauer said.

Seeing as COVID-19 severely affected the team’s offseason, Bauer said there’s an even bigger emphasis than usual on the games occurring before the district schedule begins. PRC is going to try and get as close to perfect as possible in these upcoming games, so that when district play starts the Lady Blue Devils have a better shot of beating their opponents.

“I think the games before district are of the utmost importance and I also think it’s good to play teams that are better than you. It’s hard to get better when you’re dominating, even if it’s fun,” Bauer said. The team will play Greene County Nov. 10 before facing Our Lady Academy away from home on Nov. 12. Bauer said learning experiences provided during early season games will help the team in the long run.

Blue Devils moving into the offseason after unusual season