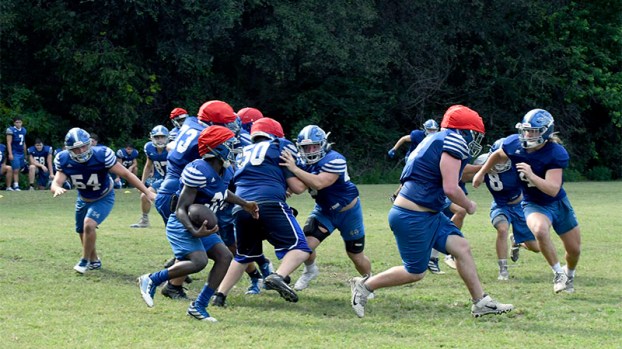 In The Offseason: Equipment will be taken up and offseason workouts will soon be starting for the Blue Devils as they look to build off of this year's performances. Photo by Jonathan Mitchell.

PRC falls to Gautier in final game of the season

The Blue Devils had already been eliminated from playoff contention heading into the matchup, which means the team could’ve come out the gates uninspired and not ready to play.

However, Head Coach Jacob Owen had his team ready to compete against the Gators in what was the Blue Devils’ final game of the season.

“I was proud of our effort. The game didn’t mean anything so there’s an option there to lay down and let the season end, but that’s really not an option if you’re a winner. I thought our kids came out, responded well and played extremely hard,” Owen said.

Running back Destin Coleman had the team’s lone touchdown with Brady Johnson adding the two-point conversion for PRC.

Owen had talked to his athletes about the importance of self-belief and trusting their teammates prior to the game.

Owen said his athletes need to get better at buying into and believing in the plan the coaches put in place.

“I think we enter every football game with the belief that we can win and compete. (However), once something bad happens we tend to start to doubt each other, doubt the plan and doubt teammates. That’s something we have to improve on going forward,” Owen said.

The loss last week dropped PRC to 3-7 on the season and 1-6 in district play to end the year.

PRC had high expectations going into this year, and Owen said his team’s work ethic and talent weren’t necessarily reflected in the team’s final record, especially considering the season took place during the COVID-19 pandemic.

“Our kids didn’t work like a 3-7 football team. We never have and we never will. They worked extremely hard, but something is missing and it’s my job to find out what it is,” Owen said.

Seeing as PRC’s football season has ended, the team will move into the offseason, a time period the Blue Devils didn’t get to take full advantage of last year because of COVID-19.

Sarah Stockstill started playing softball at age 10 after a stint in youth baseball, and has been involved in the... read more