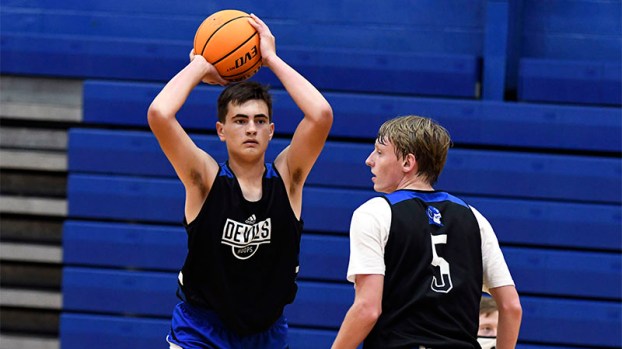 New Roles: PRC's players have had to adapt and adjust this year after the majority of last year's starting line up graduated. Photo by Jonathan Mitchell.

Tyaon Terrell led the team with 19 points, 8 rebounds and 3 assists, while Deonta James added 10 points and 5 rebounds for the Blue Devils.

The win moved PRC to 2-0 on the season after defeating Seminary to start the year.

This year’s starting five looks a lot different than last year’s after losing several players to graduation, so new athletes are having to fill those spots.

However, Head Coach Scott Stephens said so far the stage hasn’t been too big for the new starters, as evidenced by the Blue Devils’ undefeated start to the season.

“I think we’ve executed pretty well and we’ve had some guys step up into new roles they haven’t typically had.”

Following the end of the football season Stephens saw a boost in depth as several athletes returned to the court after competing with the football team.

Acclimation will have to take place quickly as the influx of players gives Stephens more options.

“I think they’ve handled it pretty well. We have our football guys that have come in here and they’ve been here four or five days. I don’t think it’s a nerves issue with them either, we’re just trying to get them back into basketball mode. It just comes down to getting their rust off and get them so they’re confident on the floor,” Stephens said.

Stephens said his team normally participates in numerous summer games during the month of June, an opportunity that wasn’t possible this year because of COVID-19.

However, thanks to the team’s successes last year, several players saw significant minutes without being in the starting lineup, which means this year’s team chemistry isn’t as far behind as it could’ve been.

“We were able to play a lot of kids last year. Some of those guys that are now starting and playing big time minutes, they have played together in a game before, although maybe not to this extent. I think everybody has a decent understanding of what their teammates can do and the expectations that go along with that,” Stephens said.

The team’s two wins have come with plenty of positives and Stephens is hoping the early season success is something the Blue Devils can use to propel themselves forward.

There’s no such thing as a perfect performance, but the first two games this season hint at the team’s potential.

“Defensively we haven’t been bad, but there’s always room for improvement. I would like to continue down the path we’re going on and expand it as we go. The key right now is getting the framework and base down, then building on top of that,” Stephens said.

PRC’s next matchup will be an away game at Sumrall on Nov. 16.

Bulldogs back in action Friday

PERKINSTON — Mississippi Gulf Coast plays its first game after 22 days, and the Bulldogs will be facing a unique... read more