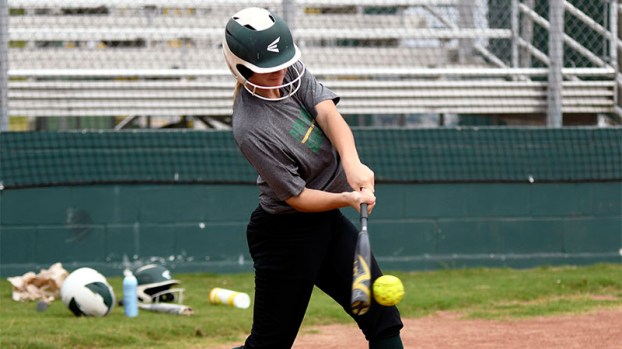 Hitting Practice: Hitting, fielding and other skills will be analyzed in a couple weeks when the Lady Hornets host their fall series scrimmages. Photo by Jonathan Mitchell.

Head Coach Janessa Deckwa said the team will likely play two to three games depending on how the team looks heading into the Thanksgiving break.

Right now the inter-squad scrimmages are set to take place the first week of December as the players get set to experience a competitive environment for the first time since last season’s early cancellation.

The timing of the series is purposeful as the team looks to get back into the competitive mindset heading into the second semester.

“We always try to scrimmage before the holidays just to gauge where we are and what we need to work on when we get back from Christmas holidays, because then we’ll only have a month and half before we start playing games,” Deckwa said.

The team will be split in half and battle each other not only for bragging rights, but also for playing time.

Deckwa said there are still questions when it comes to certain defensive spots, and the scrimmages will help the coaching staff determine who should be on the field for the Lady Hornets when the season starts.

“I think because we have positions that have not been nailed down it gives the girls an opportunity to perform in a game setting. It puts that pressure on them and makes it more game like so we can see how they perform,” Deckwa said.

Performance on the field matters, but there will be other areas of interest Deckwa and her staff will be evaluating during the scrimmages.

This includes how the athletes, both inexperienced and veteran, handle the pressure and adversity that comes in a game like situation.

“It’s hard to measure some of those things through the practices we’ve been having. It’s so different after we work on fundamentals and mechanics all fall, putting it all together in a game setting, seeing how they communicate, how they function as a team and deal with adversity (is important),” Deckwa said.

Last season’s premature cancellation because of COVID-19 prevented the athletes from getting the reps they’d normally get and hindered younger athletes’ development.

Getting those players on the field for the fall series will be a good test and allow athletes to get back into the rhythm of things after not competing for so long.

“(Some players) haven’t had a ton of varsity experience so I think any opportunity to set up a game like feel for them and get as close as we can to a game day feeling (is important) because that can sometimes be the biggest hurdle for a younger player is handling the nerves and pressure,” Deckwa said.

Deckwa said it’s still unclear what spectators, if any, will be allowed to attend the series because of COVID-19 restrictions. That information will be known closer to the end of this month.