Poplarville soccer gets a win in last game before district play 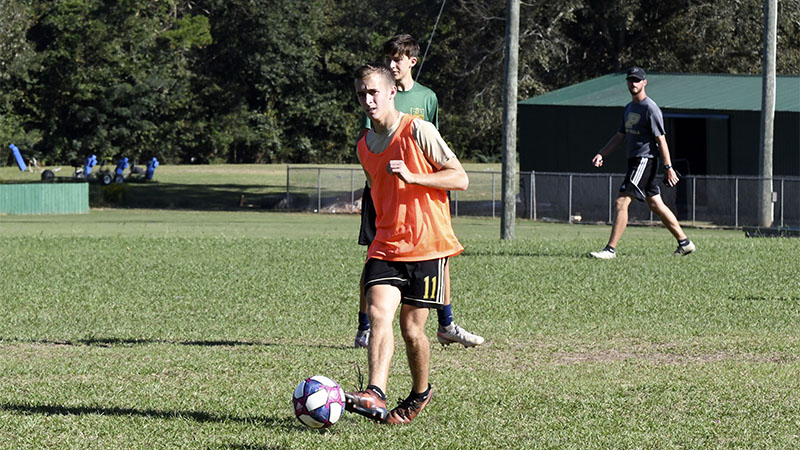 Slot It Home: Logan Price takes a shot on goal during a finishing drill. Photo by Jonathan Mitchell.

The Poplarville Hornets soccer team took on the Hattiesburg Tigers Nov. 19 and came away with a resounding 7-0 win.

Aiden Bond had a brace for Poplarville while Spencer Stuart, Zach Carpenter, Devin Ladner, Gavin Lee and Lucas Santiago also found the back of the net.

Head Coach Luke Gipson said his athletes took control of the game and were able to play freely as the goals started piling on.

“It was the first game we looked like we all played together. The boys were confident. After scoring the first couple of goals it looked like we relaxed and started playing a little more inspired. They were more confident and creative,” Gipson said.

The team was left with a leadership void when senior defender Sonny Davis graduated last year.

It was only a matter of time before another player stepped up to assume those responsibilities, and it’s no surprise that Davis’ partner on the back line is taking charge as the team’s leader.

“Gavin Lee, who played with Sonny, has stepped up and been a very positive, but also demanding leader. The boys have really taken to him in that role. He’s been playing his butt off. He got a lot of experience with Sonny so the transition was easy and everybody feels more comfortable when he’s there and leading,” Gipson said. The victory over Hattiesburg was the Hornets’ first of the season.

Poplarville’s early season competition has consisted of some of the best teams in the state, which was purposeful.

Gipson wanted to test his players early and often so when district play rolled around the athletes would be ready.

“(Our record) is not something that’s pretty, but there’s a lot of experience in that record that we’ll reap the benefits of from here on out. I like to look at the style of play of those teams we play (before district), then have us go back and review that film,” Gipson said.

The match against the Tigers was the last before the Hornets dive into their district schedule.

Poplarville will play at Purvis on Dec. 1 in the team’s first district game of the year.

Gipson said the importance of the game against the Tornados can’t be understated. “I think every district game you play is important because you could quarantine and have to forfeit a couple. After getting a win under our belt, if we were able to win (at Purvis) and start 1-0 in district moving forward that would be huge because of the uncertainty of quarantine,” Gipson said.

The Lady Hornets cruised to a 4-1 victory thanks to goals from Chasity Dearman, Juliana Wells and Evelyn Kimball.

Dearman and Kimball have maintained their scoring form throughout the season and have been dangerous for Poplarville in the final third.

Head Coach Beth McShea said the duo has done a good job of providing goals, even if it takes a team effort to find the back of the net.

“Chasity and Evelyn have been great in finishing for us as most of their goals have come from great assists as well. They may be the front-runners right now, but I’ve got several that have started tacking on here lately,” McShea said.

The team has serious experience across the lineup and several athletes had been playing club soccer before the start of the season.

The non-stop work means the team hasn’t had conditioning issues, although McShea still thinks there are improvements to be made in that area.

“Conditioning wise, I think we have a little further to go on that, but the girls have been great with pushing themselves and taking a quick break when needed to be at their top level during games,” McShea said.

The team is heading into district play with several wins already in the books.

Confidence is high and the team’s leadership combined with the players’ intensity means the Lady Hornets will be searching for another win when the team takes on Purvis Dec. 1.

“We have several players who are getting to where they are comfortable being a voice on and off the field. So far I think the team morale is good. They are pretty determined to do well this year in district and are even eager to practice during breaks, whether it’s with the team or on their own,” McShea said.