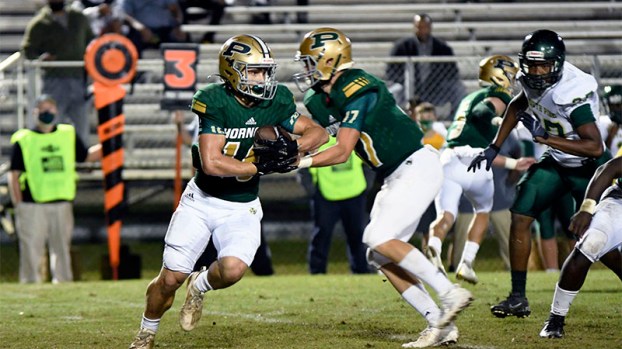 Getting The Carries: Running back Greg Swann takes a hand off and searches for an opening. Swann had 98 yards on 14 carries for Poplarville against South Pike last week. Photo by Jonathan Mitchell.

Poplarville shuts down South Pike in second round

Twenty-one points in the first quarter proved too big an obstacle for South Pike as Poplarville was able to ride that early game momentum the rest of the competition.

“I thought we played hard, blocked well for the most part and we tackled a lot better. We cut down on some of the penalties and I thought overall it was a good game,” Poplarville Head Coach Jay Beech said.

The Hornets’ defense was lights out all night and the secondary came up big with multiple interceptions and deflected passes.

Defensively there were several shifts that occurred throughout the night with the Hornets even shifting how many lineman were on the field to deal with South Pike’s passing attack.

Now that it’s win or go home playoff football, the ability to adapt and change on the fly becomes even more important for Beech’s team.

“We try to practice all different scenarios that the team may give us so we have back up plans. We also practice for things we haven’t seen in case they do show us something like that. Our fundamentals on offense and defense really help us to be able to adjust to whatever they’re trying to do,” Beech said.

Staying fresh and keeping things moving will be critical this week as the Hornets prepare to travel to North Pike Friday night for its third round matchup.

Beech said his offense will have to be firing on all cylinders when the two teams face off this week.

“They’ll be one of the best defenses we’ve seen all year. They have a lot of talent on defense with really big, strong kids at linebacker and on the defensive line. It’s a really great defense,” Beech said.

The two teams are familiar with each other having met in the playoffs last year.

“We went there last year and barely came away with a win, We know it’s tough to play there, but we’re pumped and excited to play,” Beech said.

Friday night’s game will be at North Pike and kickoff is set for 7 p.m.

PRC basketball getting into the swing of things