Poplarville one win away from playing for the state championship 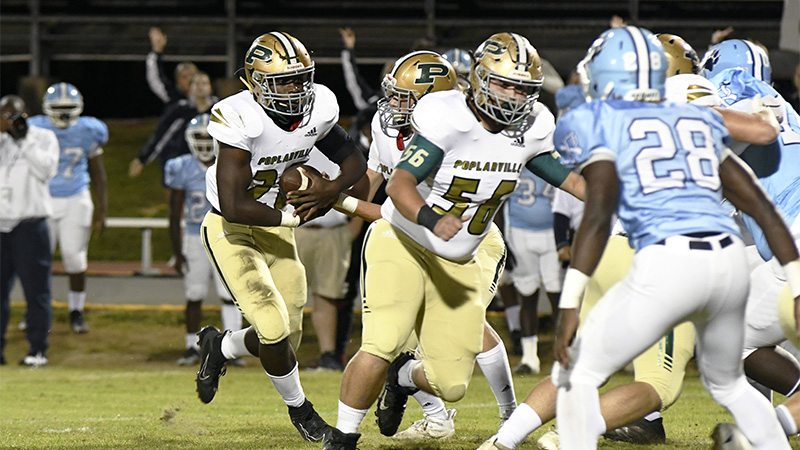 Running Game: Running back DJ Richardbey follows his blockers during a running play against North Pike. Photo by Jonathan Mitchell.

The Poplarville Hornets are riding high after a 62-6 drubbing of the North Pike Jaguars last Friday night and are now preparing for this week’s opponent, the Mendenhall Tigers.

Last week’s demolition of North Pike came down to execution and intensity as Poplarville struck early and often to put the game out of North Pike’s reach.

“I thought we executed at a high level. I thought we blocked well, ran hard. Defensively, we were able to get some turnovers early. That really helped us, and we played with a lot of energy,” Head Coach Jay Beech said.

Turnovers have become a key weapon in Poplarville’s arsenal this season as a way to not only stop an opponent’s drive, but also set the offense up with good field position.

Whether it be interceptions, fumbles or forcing opposing offenses to turn the ball over on downs, the Hornets’ defense has been getting the ball back in a variety of ways.

“That’s a focal point for our defense is trying to get turnovers. If we win the turnover battle we win the game. We’re focused on turnover drills that we work on during practice. Anything you put an emphasis on you usually see happen in a game,” Beech said. Poplarville also used its size and strength to dominate opponents physically this year.

That was the case last week against North Pike, and Beech is hoping to see more of the same this week against Mendenhall.

It didn’t happen automatically this season after losing out on spring ball and a weird summer because of COVID-19, but the players are starting to embrace the team’s physical nature and it’s paying dividends on the field.

“We take pride in our physicality. We usually work on that in the spring, but we didn’t get a spring (due to COVID-19). It took a couple games before we started playing really physical, but physicality is the (main aspect) of our game,” Beech said.

Beech said his team’s stability when it comes to starting line ups offensively and defensively has also helped the squad during this deep playoff run.

Staying healthy and keeping playmakers on the field has allowed the Hornets to build chemistry.

That familiarity could be beneficial when Poplarville takes on Mendenhall Friday night.

“When it comes to our team chemistry I think we’re doing good with that, along with limiting injuries. We’re not having to replace kids left and right. Hopefully we remain blessed and keep our guys healthy,” Beech said.

The game against the Tigers will be at home for Poplarville with kickoff taking place at 7 p.m.