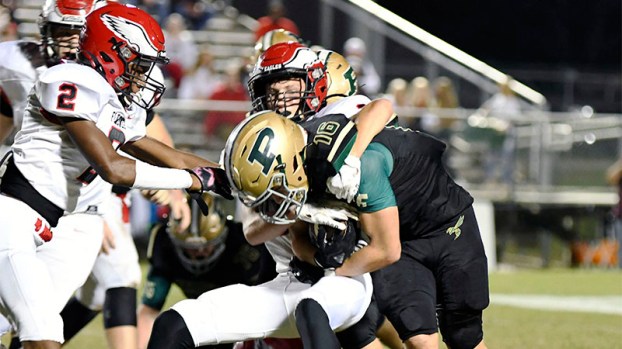 Not Going Down: Running back Greg Swann fights for more yards as a Florence defender tries to tackle him. Photo by Jonathan Mitchell.

The Poplarville Hornets easily defeated the Florence Eagles last Friday night 62-17 by using big plays and a suffocating performance from the defense.

The win propelled Poplarville into the second round of the playoffs, which means this week the Hornets will take on the South Pike Eagles, at home, on Nov. 13.

Last year these two teams met in the playoffs. Poplarville emerged victorious with a 31-20 win that sent the Hornets to the semifinals.

However, the Poplarville team taking the field Friday night looks a lot different than the one that competed for a state championship last year.

There are several new starters in key positions, but Head Coach Jay Beech said his athletes have done a good job of staying even keeled this season. That was especially true last week since some of the athletes on the field had never competed in a playoff game.

“DJ Richardbey was hurt and didn’t play last year. Tyron Holston was a defensive starter last year, this is his first year on offense and our quarterbacks are brand new. We also have a handful of starters on defense that didn’t play any last year, but they’ve handled it well. They’re just playing hard and we’re not putting extra pressure on ourselves,” Beech said.

Another benefit of last week’s game was that Beech was able to get some of the team’s younger players meaningful reps in a playoff game because of the large lead.

Beech said that with COVID-19, and the possibility of certain players needing to quarantine any given game day, it’s important to get younger athletes time on the field as they may be called upon.

“You may have kids out any given week, may have a couple out here and there. The more we can play and get game experience is good because we have to have some of those guys ready to step up in a situation like that. We had a lot of kids without a lot of experience the past few weeks getting in game situations,” Beech said.

Preparation is in full swing for the Hornets as they get ready to host their second playoff game this season.

“We’ve watched film and put together game plans we think will be good against South Pike. We have it down on paper, now have to put it into action. We’ll practice the game plan Monday, Tuesday, Wednesday, Thursday and hopefully have it perfect by Friday,” Beech said.

The Eagles making it this far into the playoffs isn’t a fluke, and the Hornets know that.

If matchups from previous years are anything to go by, the game Friday will be a test for Poplarville.

“I think we have a good chance to win if we play hard and with a lot of focus. We played South Pike the past couple of years in the playoffs and had to play great to win those games. If we want to win Friday night, we’ll have to play great again,” Beech said. Kickoff is set for 7 p.m.

The Picayune Maroon Tide is coming off a close loss to the Wayne County War Eagles 27-16, but due to... read more