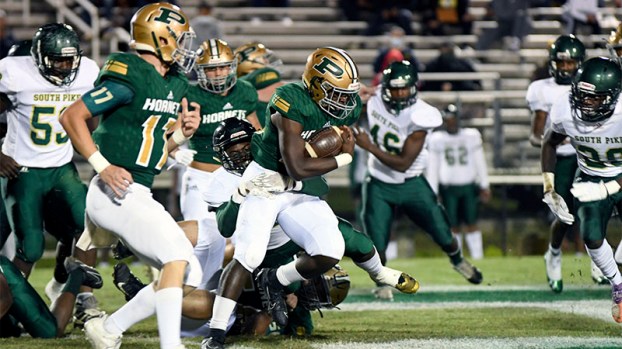 Tough Yards: Running back DJ Richardbey drags a defender with him as he looks to reach the first down marker. Photo by Jonathan Mitchell.

The Poplarville Hornets took on the South Pike Eagles in a second round matchup that saw the Hornets win 27-6 to advance to the third round of the playoffs.

Poplarville started the game on a tear as the Hornets marched down the field on their opening possession and scored.

Running back Tyron Holston found the end zone on a 17-yard touchdown run that was followed up by a Preston Stuart extra point.

Poplarville had an early 7-0 lead with 7:24 left in the first quarter.

A quick three and out by South Pike gave Poplarville the ball back on its own 33-yard line.

A long run by Greg Swann set up running back DJ Richardbey for a 15-yard touchdown run to finish off the drive.

This time Zach Carpenter came on for the PAT and split the uprights to put the Hornets up 14-0.

On the following possession, cornerback Jamaya Henry intercepted an errant Eagles throw, which gave Poplarville the ball on the South Pike 32-yard line.

Three plays later Holston found a hole and sprinted down the field for a 30-yard touchdown run. Following another extra point attempt the Hornets were up 21-0.

The two teams then traded possessions with the Hornets forcing South Pike to turn the ball over on downs multiple times before the second quarter ended.

Poplarville took its 21-0 lead into halftime.

The Eagles needed a spark in the second half and they got it through running back Cameron Reynolds.

A long drive by South Pike in the middle of the second quarter ended with a Reynolds touchdown run from 5-yards out.

The Eagles then went for a two-point conversion, but were unsuccessful.

That score remained the same until Richardbey sealed the Poplarville win.

After burning a lot of time off the clock in the fourth quarter, Richardbey hit pay dirt on a 32-yard run.

The extra point was no good, but the 27-6 lead proved enough for the Hornets as the final minute of regulation ran out.

Head Coach Jay Beech said his team was going to accept any positive result, even if it wasn’t pretty.

“This is playoff football and you’ll take any win. We’re moving on and that was our goal all along.  This team is not done,” Beech said.

Poplarville’s third round opponent and venue will be determined by other results from across the state, but the team’s next game will take place Nov. 20.