Poplarville defeats Mendenhall to move on to state championship 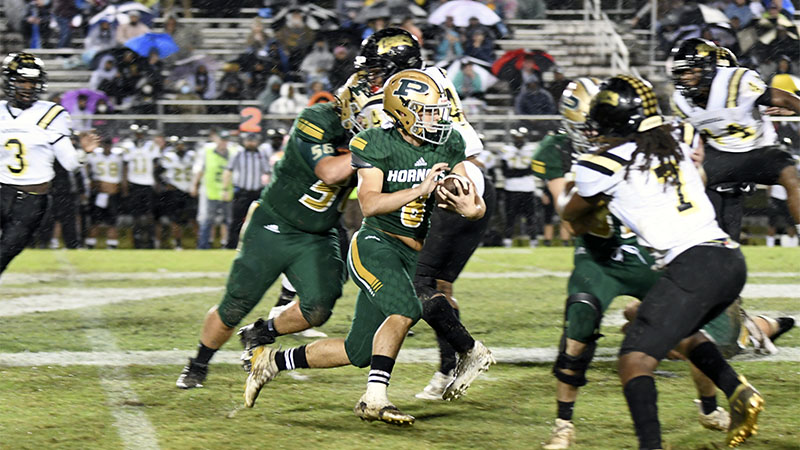 Headed To State: Running back Tyron Holston heads upfield after taking a hand off.

The Poplarville Hornets and Mendenahall Tigers battled last night with a spot in the 4A state championship on the line and Poplarville came out on top 35-6.

Both teams had to deal with constant rain throughout the contest, but that wouldn’t stop the Hornets from finding a way to win.

Poplarville elected to receive the opening kickoff and started the drive on its own 28-yard line.

On the first play of the drive running back Greg Swann found an opening and ran 72-yards to pay dirt.

The Hornets went for two and it was converted by running back DJ Richardbey to give Poplarville an 8-0 lead just 16 seconds into the game.

Poplarville quickly got the ball back after an interception and scored again through Swann, this time from 12-yards out.

Another successful two-point conversion by running back Avan Jarvis had the Hornets up 16-0 with 9:12 remaining in the first.

The two teams traded possessions until Mendenhall got on the scoreboard early in the second quarter.

Mendenhall quarterback D.K. Jenkins ran into the end zone from 2-yards out, and after the Tigers’ unsuccessful two-point conversion, the score was 16-6 with 10:03 left in the second quarter.

Poplarville responded with another score as the Hornets drove 52-yards down the field.

Richardbey fought his way into the end zone from 2-yards out and after kicker Zach Carpenter’s PAT the score was 23-6 in favor of Poplarville.

That score remained the same as the two teams went into their locker rooms at halftime.

Poplarville put another six on the board early in the third quarter as the Hornets took six minutes off the clock before Jarvis scored on a 14-yard run.

The ensuing kick was no good, and Poplarville led 29-6 with 1:49 left in the third quarter.

Running back Tyron Holston sealed the game with the final score of the night on a 51-yard run with 10:45 left in the game.

The snap was fumbled on the extra point attempt, but Poplarville’s lead of 35-6 lasted through the end of regulation.

Poplarville’s win means the Hornets will compete for the 4A state championship next week in Jackson.

The game will take place at Mississippi Veterans Memorial Stadium on Dec 5. at 11 a.m.

Following the victory over Mendehall, Poplarville Head Coach Jay Beech heaped praise on his senior players who have led the Hornets this season.

“They had to work their butt off and have earned everything they have. I’m so excited that their senior year they’ll get to go to the championship. It’s unbelievable and hard to imagine. It’s not even sinking in yet how special this is,” Beech said.