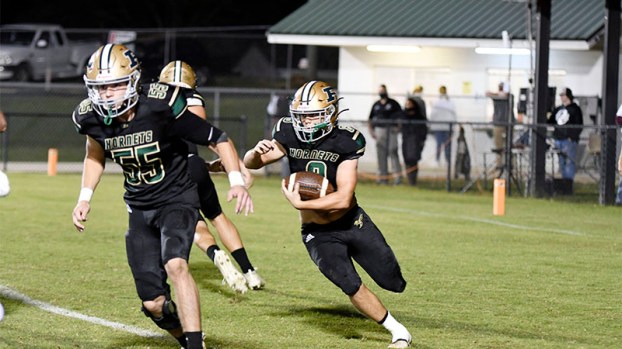 Poplarville’s victory means the Hornets will get to play next week in a second round playoff game.

Florence got the opening possession of the matchup, but after an interception by cornerback Jamaya Henry Poplarville marched down the field and finished off the drive with a 20-yard touchdown run from running back DJ Richardbey.

Preston Stuart came on for the extra point, but it was blocked giving Poplarville an early 6-0 lead.

The Hornets’ offense quickly got the ball back and in just three plays found pay dirt again as Richardbey took the ball into the end zone for his second touchdown of the game.

Stuart’s PAT was good, giving Poplarville a 13-0 lead with 6:37 left in the first quarter.

That score held until the first play of the second quarter when running back Greg Swann saw an opening and sprinted 73-yards for a touchdown.

Another point after from Stuart gave the Hornets a commanding 20-0 lead.

The teams traded possessions until Poplarville broke off another big play offensively, this time with quarterback Matt Will connecting with running back Tyron Holston for a 60-yard touchdown pass.

With 4:23 remaining in the half Poplarville led 27-0, but Florence answered with its first score of the game as running back Oakland Lewis found the end zone on a 65-yard touchdown run.

Kicker Benjamin Duncan came on for the extra point and split the uprights to make the score 27-7.

Poplarville responded on the following drive as Richardbey found the end zone for the third time.

After the extra point from Stuart, Poplarville led 34-7 with just under a minute and a half remaining in the second quarter.

However, right before the halftime whistle Duncan came on the field to complete a field goal attempt, which sent the two teams into halftime with the Hornets leading 34-10.

Poplarville then continued the offensive onslaught in the second half.

A Holston touchdown followed by a successful Richardbey two point conversion saw the Hornets leading 42-10 after the first possession of the second half.

Holston went on to score one more time on a long touchdown run to give Poplarville a 48-10 lead before the second unit came in to finish off the game.

A 40-yard touchdown run from Poplarville running back Avan Jarvis was followed by a touchdown pass from Florence quarterback Kade May to wide receiver Eric Simmons that made the game 55-17 with 10:14 remaining in the fourth quarter. One final touchdown by the Hornets brought the game’s score to its final point of 62-17, which means Poplarville will advance to the second round of the playoffs next week.

Even after the dominant win, Head Coach Jay Beech said his team wasn’t quite reaching the level needed to achieve the team’s ultimate goal this year, win a state championship.

“Winning is fun, and they’ve put in the work to get here, but I know we can be better,” Beech said.

Poplarville’s opponent, and where the game will be played, next week will depend on other final scores from across the state.

Poplarville’s Lady Hornet basketball team is making the most of this offseason as the team tries to secure a playoff... read more