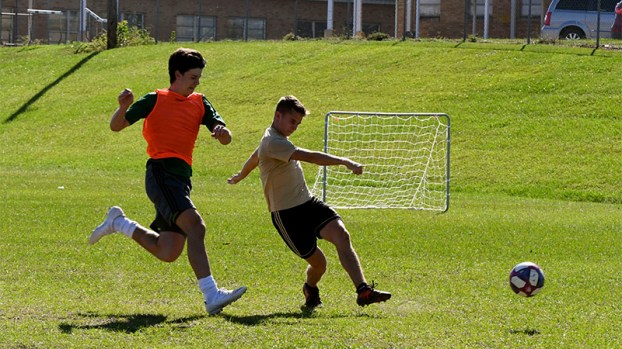 Final Third: Poplarville's boys soccer team will look to improve its finishing in practice after missing chances to score against Petal. Photo by Jonathan Mitchell.

Poplarville battles to a tie with Petal

The Poplarville Hornets boys soccer team took on the Petal Panthers Monday evening in a game that was evenly matched, ending in a 1-1 tie.

Logan Price had the lone goal for the Hornets, but Petal was able to tie the game thanks to a successful penalty that found the back of the net.

Gipson said his athletes had plenty of chances to increase the team’s lead, but would just barely miss the mark.

Finishing troubles have been an issue for the Hornets this season as the players look to knock off the rust that comes with a long layoff.

Athletes didn’t get the chance to compete over the spring or summer because of COVID-19, and Gipson thinks those lost games are having an impact on the team’s finishing.

“I’m assuming everybody is in the same boat, that with missing summer games and tournaments they’re not getting the reps (in competitive environments). That’s been a focus in practice, is how can we drag defenders out and create opportunities,” Gipson said.

Some line up changes have been made and veteran wingers Bryson Andrews and Zach Carpenter have been spending a lot of time out wide for the Hornets.

Gipson is hoping their experience will help the team create more space and put defenders in situations they don’t want to be in.

Defensively the Hornets have been solid even after having to replace several players along the back line this year.

The new formation has made the Hornets a tough team to crack, but Gipson thinks there’s still room for improvement.

“I think we’ve been good (defensively). Our goalkeeper Donovan Minor has done a fantastic job. The last thing we’re adding is awareness of where we are and movement,” Gipson said.

The team’s next match will be at Hancock Thursday evening before a weekend game against St. Stanislaus.

Hancock will provide a good test for Poplarville because the 6A powerhouse is always capable of fielding a talented starting 11.

Gipson said he’s looking forward to seeing how his team responds to the challenge.

“My expectations are for us to be competitive and be physical. Hancock is a bigger school. They have guys that are quick and very physical, which you usually see from a 6A squad because of their numbers. I want to see how we deal with their physicality and their speed,” Gipson said.

The Hancock match will start at 7 p.m.