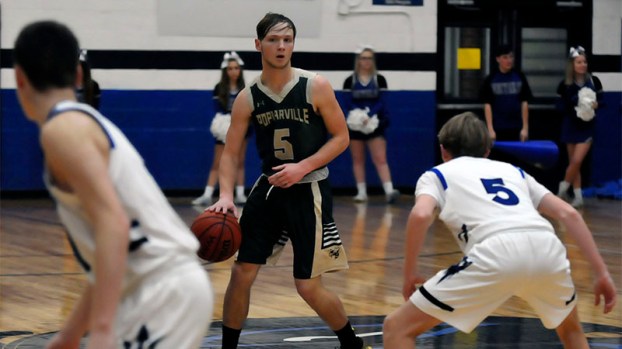 Missing Players: Torry Polk is on of the Hornets' basketball players currently competing with the football team. File photo by Jonathan Mitchell.

Poplarville’s girls and boys basketball teams took on the East Central Hornets Tuesday evening with the girls winning 61-11 and the boys losing 28-26.

Poplarville dominated East Central on both ends of the court to secure a season opening victory.

Four players scored in double digits for the Lady Hornets.

Efficiency on offense and a strong defensive display came on the back of months of preparation, which meant the athletes were ready to dominate from the get go.

“I think we were well prepared and we did what we were supposed to do. I was pleased with the way we played and I thought we played with a lot of heart,” Head Coach Robin Jeffries said. A well-balanced team can space out the floor and prevent an opponent from honing in on a specific player, which the Lady Hornets can then take advantage of.

“I think it’ll help anytime more than one or two players can score. It opens the floor up and makes the team harder to guard,” Jeffries said. A message emphasized to the squad prior to the game was the importance of being smart on defense.

Fouls can ruin a basketball team’s best-laid plans, so Jeffries is hoping her players continue to have defensive discipline next week when the team takes on Bay High.

“We did make some not so smart fouls towards the end. I really do think the kids were having fun playing and we played an up tempo game, so I think they got caught in that and initiated fouls that we didn’t need to,” Jeffries said.

The boys team is currently without several key players who are participating in the football team’s current playoff run.

Lack of depth, along with two starters racking up fouls, hindered the Hornets against East Central as Poplarville lost the close game 28-26. Amari Gilmore led Poplarville with 16 points and 10 rebounds, while Dalton Davis added 8 points, 3 steals and 4 rebounds.

Head Coach Run Bowen is used to having several players missing for the first couple of games because the football team usually makes it into the playoffs, which overlaps with the start of the basketball season. In years past, Bowen delayed the start of the season so only one or two contests took place before football players returned, but because of the inexperience of his roster Bowen decided to start the season earlier than normal. “This year I decided to play four or five games before football is done and take it on the chin to get them game experience, so down the road they get a little better,” Bowen said.

The team’s next game will also be against Bay High on Nov. 17. Seeing as there will be an extended period of time before the game, the Hornets will be looking to fine tune their own systems and strategies instead of scouting the opponent.

“I’m more worried about working on our guys and the five we have more so than what they do. Just try to be better at what we do. I know Bay is a hard nosed team and they’re going to play hard. We have to meet their intensity with our five guys,” Bowen said.