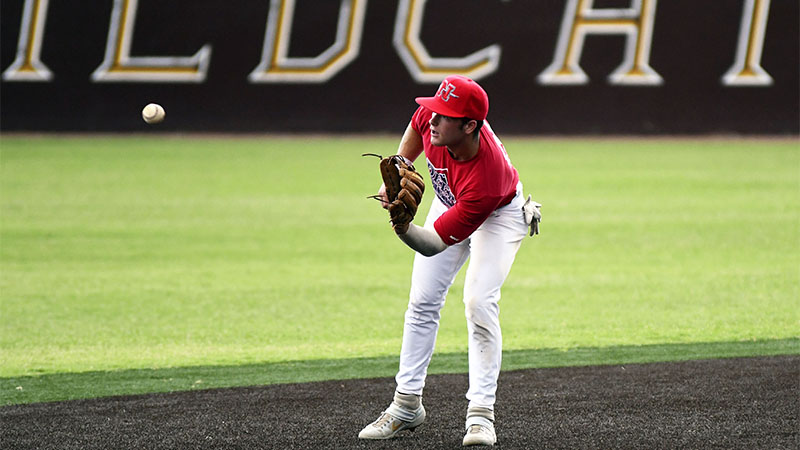 Missing Bats: Former Poplarville player Blaise Breerwood fields a ball during a summer league game. Breerwood is one of the players the Hornets will have to replace in the line up this year. Photo by Jonathan Mitchell.

The Poplarville Hornets baseball team is in the midst of its offseason and still striving to get players back in the swing of things following the loss of last season to COVID-19.

Poplarville had been focusing on scrimmages and getting players in game like situations the past couple of months but the players are now back into the weight room.

“It’s been a little messed up, but I think everybody kind of feels that. We did some live play, although not as much as we would’ve liked. The next few weeks will be a lot of lifting, conditioning and a lot of hitting still,” Head Coach Slade Jones.

Jones is still without a decent portion of his team with some players out injured or taking part in another sport.

A sizeable chunk of the baseball team is part of the football squad.

Once football season ends, there will have to be a transition period as Jones gets the players up to speed on what aspects of their game they need to work on. “The great thing is those guys are always competing. They’re big, strong and aggressive. The bad part is they miss a lot of reps and in baseball it’s all about reps. It’s a skill sport. What we’ll have to do is take a step back from what we’re doing right now to catch those guys up,” Jones said.

While the team has started moving towards conditioning and weight lifting, Jones said getting in a couple scrimmages holds a variety of benefits for his players. Some of the athletes may not have been in a competitive situation since last season, so getting players back on the mound, back at the plate and in the outfield again is important.

“In my opinion you can’t play enough. To get them in there and have them compete in game like situations at game speed is important. This year has been a little different. In the previous couple of years we got a lot more inter-squads in and were keeping them playing. It’ll be something we’ll just have to overcome and I think we will,” Jones said.

Things will start picking up for the team after the players return from Christmas break.

At that point the season will be fast approaching, and Jones said the team will use after school practices to get in as much work as possible before the games start occurring.