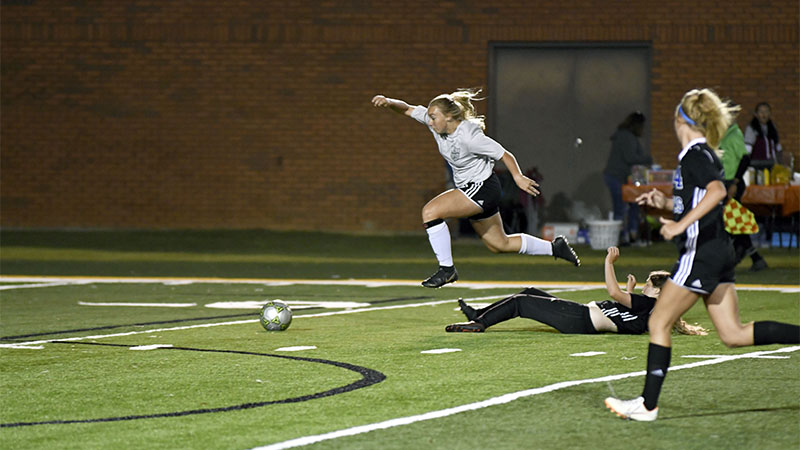 The Poplarville and Pearl River Central soccer teams faced off Tuesday evening with the Lady Hornets winning 4-1, while the boys tied 0-0.

The Lady Hornets defeated the Lady Blue Devils with a 4-1 score, and will look to build on the performance.

Chasity Dearman and Evelyn Campbell each netted two goals for the Lady Hornets, while Alyssa Fleming provided the lone goal for PRC. PRC Head Coach Joe Weems said he liked Fleming’s play from her attacking midfield position, especially given the team’s change in formation this year.

“We left her alone in the middle because we did drop (a player back) into a defensive position. She played really hard. She was really aggressive and she has to be because she has a lot of ground to cover and a lot of responsibility,” Weems said.

Poplarville Head Coach Beth McShea had been harping on her athletes to be more aggressive this year, and it paid off when the players took the field Tuesday evening.

“That’s one thing we’ve been working on in practice because other schools are going to be aggressive. That’s new for us and that’s always been something that’s held us back,” McShea said.

The Lady Hornets started seven seniors against PRC, with some of the athletes having played together for over six years.

McShea said experience, chemistry and the ease of communication between the athletes helped lead to the positive result.

“It’s huge because we missed out on so much of getting to see how they would play together with the new formation and things we’d get done during the summer,” McShea said. Weems said areas of improvement for the Lady Blue Devils included more defensive discipline and awareness of where opposing players are in the box.

PRC will look to get better at those fundamentals as the Lady Blue Devils seek their first win of the season. “The most dangerous person on a soccer field isn’t the person with the ball outside, it’s those in the middle waiting for the ball to come across. The middle has to be corrected, and we need to make sure we hold our shape better so that our defense doesn’t get stretched out,” Weems said.

The matchup between the Hornets and Blue Devils served as PRC’s first game action of the season.

Poplarville took part in a jamboree and a “classic” game before the county rivals played one another.

Weems said he was happy with his team’s performance considering the fact that several starters didn’t play.

“We had four or five middle schoolers that were playing. I was very happy about the way they played because we had to put people in positions they weren’t used to. The younger guys are stepping up now that they have more of a role this year,” Weems said.

The Hornets used the game as another learning opportunity while the team tries to make up for the lack of practices over the summer.

Poplarville Head Coach Luke Gipson said he liked his team’s ability to control ball possession and create chances in the final third, but that there were some things needing to be cleaned up moving forward.

“We’re seeing the effect after three games (this season) of what not having games over the summer looks like. We’re dealing with a lot of pre-season issues. Finishing, communicating and anticipating movements (are off) because of the lack of playing time over the summer,” Gipson said.

PRC’s next match was against the Purvis Tornados, and was played on the Pearl River Community College campus. Poplarville will have a day to rest before facing the Pass Christian Pirates away from home on Nov. 5.