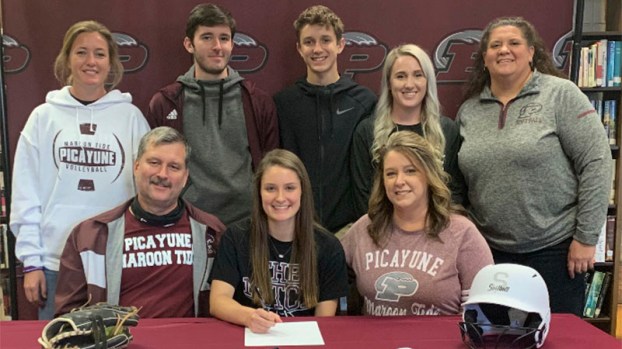 Sarah Stockstill started playing softball at age 10 after a stint in youth baseball, and has been involved in the sport for nearly a decade honing her craft.

Stockstill’s determination, skill and work ethic combined with effective play on the field for the Picayune softball team to catch the eyes of some college programs. On Nov. 6 Stockstill signed with Southwest Mississippi Community College to continue her softball journey at the junior college level.

Stockstill spent her childhood playing baseball originally before making a less than smooth transition to softball.

She said she preferred baseball as a sport to begin with, but over time, and with some help from former Picayune Softball Coach Kristi Mitchell, she learned to love softball.

The passion for the game led to Stockstill spending hours on end working to become the best player she could be, which current Head Coach Courtney Dickens said is what has allowed the starting shortstop to flourish.

“She puts a lot of work in outside of practice and I think that’s very important if you’re wanting to get to the next level. There have been times I’ve had to make her leave the field because otherwise she’ll stay out there forever,” Dickens said.

Stockstill’s recruitment was impacted by the current COVID-19 pandemic.

Last year’s season was cancelled just a couple weeks in because of the pandemic, and then because of travel restrictions campuses were closed to visitors.

“It impacted the recruitment for my class really bad because I wasn’t able to go on campus. Coaches had to Facetime me and walk me around the campus. That was hard for me to be able to choose a school when I couldn’t actually be there,” Stockstill said.

However, SWCC had been in contact with Stockstill since her sophomore year and after restrictions lifted she was able to tour the facilities.

“Southwest really come after me and made me really feel like they wanted me. It was a great accomplishment to be able to achieve that. I’m really grateful for these opportunities, and my coaches have really pushed me hard to try to get me a scholarship because that’s what I told them I wanted,” Stockstill said.

Seeing as Stockstill has been Picaunye’s starting varsity shortstop since freshman year, the new signee will bring plenty of experience when she joins the Lady Bear’s softball program.

Dickens said Stockstill set an example for younger players with her work ethic. Hopefully the up and coming athletes will see what it takes to get to the next level by following Stockstill’s example.

Stockstill still has her senior season to prepare for as the Lady Maroon Tide softball team hopes to have a full season after last year’s cancellation.

As a coach Dickens said she isn’t solely responsible Stockstill’s performances or contributions to the program; it all comes from within for the senior shortstop.

“It doesn’t matter as coaches what we teach them, they’re the ones who have to apply it. I really can’t take credit for anything as far as where she is now. I’m super proud of her putting in the extra work and extra effort, and believing in me, Coach Kristi (Mitchell) and this program. She’s really tried to do everything I’ve asked her to do and I think she’ll represent our program very well,” Dickens said.