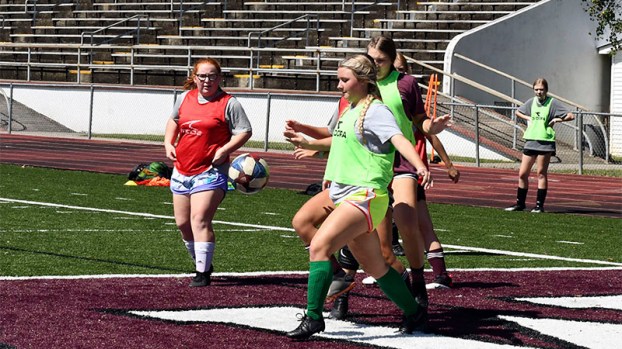 Battle It Out: Lady Maroon Tide players fight for possession of the ball during a drill. Photo by Jonathan Mitchell.

Picayune’s Lady Maroon Tide were aggressive offensively as they beat Forrest County’s Lady Aggies on Nov. 5 in a 7-0 win.

Head Coach Ed Williams said his players grew more and more confident as the goals piled up, which the team will be looking to use moving forward into a Nov. 12 matchup with the Purvis Lady Tornados.

“That type of offensive production we haven’t seen in many games. We’ve been in positions to score goals, we just haven’t been finishing, but when you put a couple in the net then it looks a lot bigger and it’s easier to score,” Williams said. The team didn’t have its normal starting line up on the field against the Aggies with several players in quarantine due to possible exposure to COVID-19.

Williams has stressed the importance of adaptability to his athletes this season given the possibility of players being out for several games at a time. “I remind them every day that we might play a different group based on COVID. We don’t know whose going to go. Everybody has to be ready to step in and maybe play positions they never played before,” Williams said. There’s only two seniors on the squad. The majority of players are sophomores.

However, the younger players have been competing at a high level since they were in middle school, which in turn has led to the athletes developing chemistry on the field over time. Williams said his team isn’t quite where it needs to be when it comes to player familiarity and the understanding of each other’s tendencies, but as the season progresses the connections between the players will improve.

“It’s always hard to manage team chemistry. You never know what little thing will make it better or worse. That’s one of the most fragile things on the high school level. It’s a day-to-day thing. We talk about it, we focus on it, we try to hold them accountable and make sure they hold each other accountable,” Williams said. The team’s match against Purvis will provide another opportunity for the athletes to build on last week’s result while preparing for the rest of the season.

Another win would not only keep the team undefeated, but could serve as a confidence boost for the team moving forward.

“Ideally I’d like for us to have a strong win to build confidence and put us in the mindset that we’re no longer a struggling program, we’re a winning program. High school sports are about momentum. If you get goals and wins you believe you can (keep winning),” Williams said. The game against Purvis will start at 5:30 p.m. and will take place at Lee-Triplett Stadium in Picayune.

PRC falls to Gautier in final game of the season