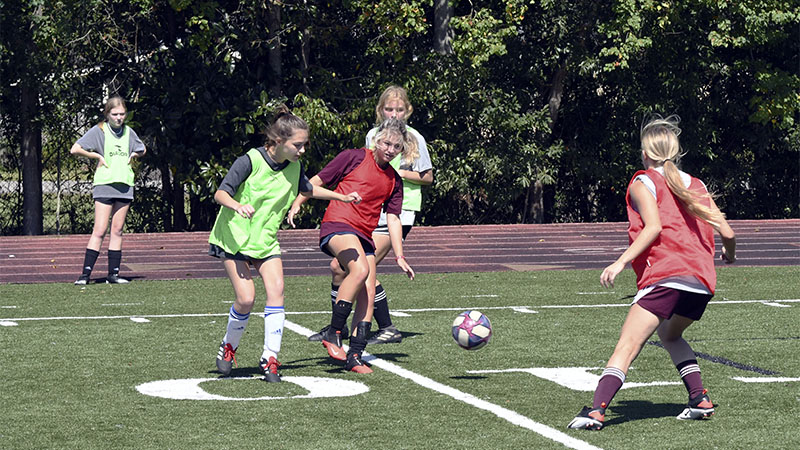 Offensive Execution: Lady Maroon Tide players pass the ball back and forth during a possession based drill. Photo by Jonathan Mitchell.

Head Coach Britton Fortenberry said his team’s performance against Pass Christian during the 2-0 loss wasn’t all that impressive.

However, with several players out due to injury, the Maroon Tide had to play some young athletes who are still adjusting to the speed and physicality of varsity level soccer.

“I knew it was going to be challenging because we did play a good bit of our young guys. We created a lot of chances but couldn’t finish. It wasn’t our best performance, but we’re going to learn from it and get better,” Fortenberry said.

Getting inexperienced athletes on the field may not yield positive results immediately, but over time the players will adjust and understand what it takes to be successful against top tier opponents.

Considering this season is taking place during a pandemic where any game there could be several players in quarantine, having young players get meaningful minutes early and often this season will pay off later down the road.

“The only way to get better is to play and experience it. The kids are getting a lot more minutes right now than they would during a regular season. They’re taking their lumps, making mistakes and learning. The playing time the young guys are getting right now is going to pay off in the long run,” Fortenberry said.

The Lady Maroon Tide lost 4-0 to Pass Christian and head Coach Ed Williams said his team still has some things to clean up offensively.

Williams said his team has worked on spacing and movement in the final third recently in hoping that come game day the players will know what to do to create the most opportunities on goal.

“One of the things we’re working on is keeping the ball and combination play, to work within our lines and figure out how to move people around to get numerical superiority in that area of the field,” Williams said. The team is still practicing during Thanksgiving week in order to keep the athletes in shape. Several Lady Maroon Tide players are currently in quarantine, which means the team’s depth has been affected as the lack of subs leads to more athletes having to play the entire game.

“This week the first half of practice we’re doing technical and tactical practice, then for the second half we’re doing full field scrimmages to keep our legs under us. After the holidays we’ll be looking at playing district games and when those come up every goal counts,” Williams said.

The next game for both teams will be against Harrison Central on Nov. 30 away from home.