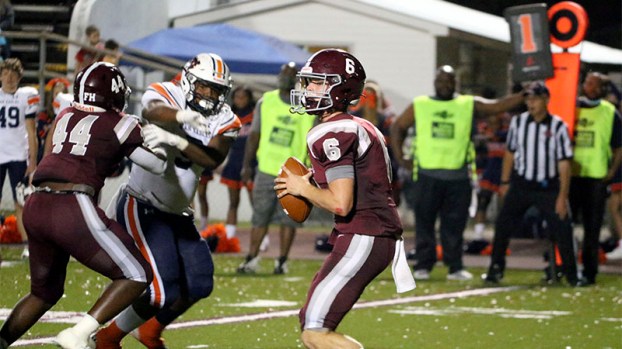 No Pressure: Quarterback Isaac Hickman sits in the pocket and looks for an open receiver. Photo by Jeremy Pittari.

The Picayune Maroon Tide is coming off a close loss to the Wayne County War Eagles 27-16, but due to the hard work put in earlier in the season Picayune had already secured a playoff spot heading in to that game.

Picayune dominated district play this year to earn a number two seed going into this week’s home matchup against the West Jones Mustangs.

The two teams met last year in the playoffs where Picayune trounced the Mustangs 49-14, which is an outcome the Maroon Tide will be hoping for again this year.

There are a number of Picayune players who were part of last season’s state championship run, so the veteran athletes understand the pressure and level of performance necessary to win in the playoffs.

“Any time you have the experience (of guys) who have played in those big games, that’s always a plus. We’re going to work our tails off to get better this week and it’s our job as a coaching staff to make sure they’re prepared to play,” Head Coach Cody Stogner said.

The loss to Wayne County was Picayune’s second in a row, but Stogner said there’s no need to start worrying about the team’s capabilities.

The Maroon Tide’s dominance heading into the final two weeks speaks for itself, so the focus will be on correcting mistakes and fine-tuning things on both sides of the ball.

Two losses in a row doesn’t mean the system is broken, and considering the team’s success this year, and in years past, the emphasis will instead be on the minor details of Picayune football.

“We’re not adding anything. We’re not changing what we do. We believe in what we do, and it’s been successful for a long time. If you get to the point where you’re changing everything up, especially at this point in the season, you’re not going to be successful,” Stogner said.

West Jones has a 9-2 overall record this season, going 5-2 in district play.

The Mustangs have several players returning from their postseason successes last season as well, so Stogner is expecting a hard fought football game to determine who moves on to the next round.

“They have a lot of players back from last year, a lot of seniors and they’re pretty good. They’re good year in and year out. They have rich tradition like we do. It’s going to be a challenge, but we’re never one to back down from a challenge. We have a lot of motivation going into this week,” Stogner said.

Picayune’s home game against the Mustangs will kickoff at 7 p.m. at Lee-Triplett Stadium.

Picayune’s Lady Maroon Tide were aggressive offensively as they beat Forrest County’s Lady Aggies on Nov. 5 in a 7-0... read more