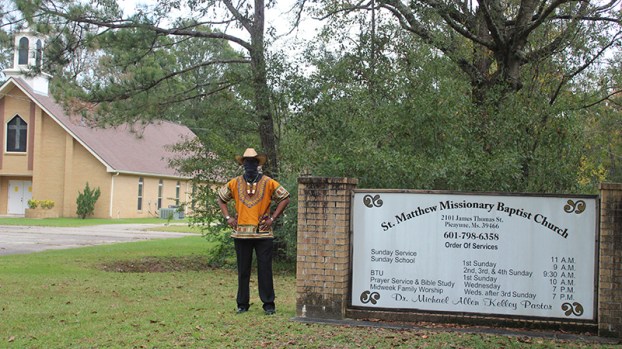 Van Bolden stands in front of the St. Matthew Missionary Baptist Church on Walker Street on Wednesday afternoon. For Bolden, the community he grew up in was always centered on the church, but now he is concerned about houses and cars being shot at and acts of intimidation occurring in the neighborhood.

Picayune Police to meet with Goodyear Community to address concerns

A public meeting will be held in the Goodyear community at 3 p.m. on Sunday, Nov. 15, at the park on Neal Road with the Chief of Police, City Manager and a city councilwoman to address growing concerns in relation to crime.

The Goodyear Community is located in Picayune off Palestine Road. Sunday’s meeting was established to discuss ongoing crime issues in the neighborhood. Attendees should bring their own chair. COVID safety measures like face masks and social distancing will be practiced.

Rev. Van Bolden, who grew up in the neighborhood and still has family members living there, said he is concerned about incidents of intimidation, like shooting at cars and houses, along with physical fights in the area.

“In times of need we always came together. We’re not perfect. We’ve had troubles just like some other communities, but nothing like this. In my 68 years, I’ve never seen nothing like this before,” Bolden said.

He drove around the neighborhood Wednesday afternoon stopping to greet people by name and tell them about Sunday’s meeting.

“What I’m really saddened about is now in this community there are many elder women who are widows and they’re living alone and now we see and we hear of the fear that they’re living in,” said Bolden. “Because of that we had a conference with Chief Drennan and the city manager. They’re going to meet with us Sunday.”

Bolden said he’s heard about incidents going on over the past six or seven months, but believes they’ve been occurring for longer.

“People are knowing things, but they’re not saying things and I think it’s probably out of fear. And then for the ones that do say something they’ll try to intimidate those people for them to shut their mouth,” he said.

Bolden said that many of the residents are older and afraid to report incidents to the police that involve a few people who live in the neighborhood.

“One week ago Monday, I got a call that my son was fighting with one of those guys. He had picked up a can and hit my son in the face right in front of his house. And I was there just talking with my son trying to make sure he was alright, when I found out these same guys had tried to intimidate another elder member right down the street. Within about 30 seconds I heard three gunshots and I thought they had killed my son, but they hadn’t,” said Bolden.

Instead of hitting his son, the bullets hit the house of an older woman living next door.

“Thank God they didn’t hit him, but they ended up in her house. I wish that the community would be more concerned,” said Bolden. “Black lives matter, yes they do. I believe all lives matter, I got to make sure I say that, I believe all lives matter. Now we talk Black lives matter, but it seems like when it’s us killing us we don’t seem to be too interested, but if a policeman kill us or a white man kill us then we seem to be up in arms. But I don’t think the whole community feels like that, but I just want to make sure that I say that.”

On Monday, Nov. 2, a Picayune Police Captain responded to the shooting, said Assistant Chief James Bolton. Diamante Myers, 27, fired four or five shots toward Bolden’s son, according to the police report. Bolton confirmed that one round struck the neighbor’s home.

A patrol officer spotted Myers on Carver Drive and after a short foot chase, apprehended him. Myers was taken into custody for aggravated assault and transported to the Pearl River County jail. The police department notified his parole officer and the Mississippi Department of Corrections placed a hold on him.

The hold means that even though a bond has been set for Myers, he will not be able to bond out, said Bolton.

Bolden said he was frustrated that a bond was set at all.

Bolton said the police department has seen reports of some incidents in the neighborhood and agreed that many of the incidents involved the same small group of people.

Police Chief Freddy Drennan said that he understands some of the incidents in the community have not been reported and he is hoping that on Sunday, the community will be cooperative and help the department better understand what is going on.

“It’s very important that they have an opportunity to talk to us and hopefully they’ll be open with us,” said Drennan.

A drug bust was conducted in the area Thursday night. On Trotter Street near Neal Road, an officer stopped a grand marquee traveling northbound on Neal Road for a window tint violation, said Bolton.

Upon making contact with Andrew Willis, 40, of 2301 Trotter St., he advised the officer that there was a hand rolled cigar containing a substance suspected to be marijuana and handgun in the center console.

The officer conducted a probable cause search and located four clear plastic bags containing a green leafy substance believed to be marijuana, totaling a little over two pounds. Willis was arrested for possession of a controlled substance with intent to distribute. The handgun was also seized as part of the crime.

One Pearl River Central High School student is fundraising to use native plants to create a serene place on her... read more