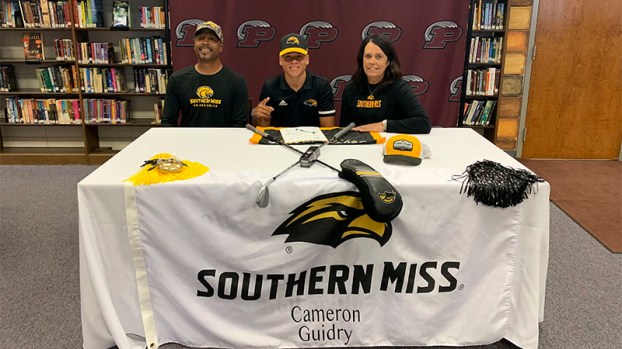 Picayune golfer ready to move to next level

Cameron Guidry has been swinging a golf club since the day he could walk, and saw his years of dedication and hard work pay off when the Picayune Memorial High School senior signed with the University of Southern Mississippi’s golf team last week.

As a toddler, he’d practice with his older brothers and father, even getting some time in with the high school team in low stakes putting competitions.

Guidry continued putting in time on the course over the years, but it wasn’t an easy process to get where he is now.

“I was pretty solid when I was younger, but then when I got to 12 (through) 15 I struggled a little bit. Then the light clicked when I was around 15 or 16. I won a few big tournaments and got my confidence back,” Guidry said.

The relationship with the Golden Eagles had been cultivating since Guidry’s sophomore year of high school.

His performances over the years caught Southern Miss’ eye and now he’s able to see the fruits of his labor.

“I got it over with before COVID hit and committed in March. It feels good. After putting in all the work, you like to see it pay off,” Guidry said.

The pandemic forced the closure of schools in early 2020, giving Guidry more time on the course.

The new signee was able to practice and play throughout the break, which meant more progress made prior to the start of this year.

“It helped because I got to put in more hours of practice than I normally do because of school. I would get there bright and early and wouldn’t leave until it was dark every day,” Guidry said.

Signing with Southern Miss is an accomplishment, but that doesn’t mean Guidry is satisfied.

The countless hours putting, chipping and driving are all spent with the hope of leaving a lasting impact on the Golden Eagles’ program.

“I want to be an All-American and I want to be the best player to ever play at USM,” Guidry said.

The senior is planning on using this year to fine tune his swing and work on the details of the sport so that when he arrives at Southern Miss he’s ready to go.

After a few years with the Golden Eagles, Guidry is unclear what the future holds.

“The goal, and it’s a hard goal to reach, but that’s why you work every day. I want to go to college for two years, and then if I’m ready to turn pro I’ll go. If not, I’ll go four years at USM and go pro right after that,” Guidry said.

MURRAY, KY. — The Pearl River rodeo team finished up its fall season this past weekend when it traveled up to... read more