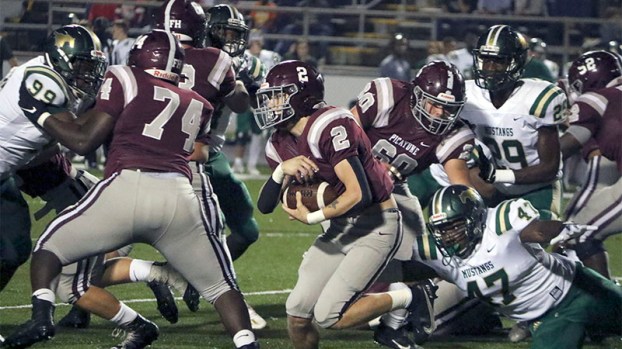 The Picayune Maroon Tide was knocked out of the playoffs last week after a hard fought battle with the West Jones Mustangs that ended in favor of West Jones 35-23. The season was shortened because of COVID-19 and Picayune had to alter its normal routines in order to keep the players safe during the unusual season.

Head Coach Cody Stogner said the way his players adapted to the changes on and off the field shows that the future is bright.

“Just the way they fought through adversity all season is tremendous on their part. There’s not much to say because it’s so hard to describe how proud I am of them and what they accomplished this year. The way they battled through adversity, it’s obvious they’re going to be great young men, great fathers and great husbands,” Stogner said.

This year’s senior class had a history of success on the varsity football team, as evidenced by last year’s state championship run and another playoff appearance this year.

Their leadership didn’t go unnoticed and helped Picayune go as far as they went this season.

“These seniors, a lot of them have played over 25 games in a row, some even more than that. It was on them this season to step up and be leaders, and they ran with it and did a great job,” Stogner said.

This was Stogner’s first year as Picyaune’s head football coach after spending several years as an assistant coach to Dodd Lee.

There were trials and tribulations aplenty, but Picayune was able to adapt and overcome thanks to the coaches in place.

“I also have to give credit to my coaching staff. You’re only as good as your coaching staff and I believe I have the best in the state. With the guys knowing (me), it wasn’t like somebody new coming into the program. It was more about just picking up where we left off,” Stogner said.

The Maroon Tide won’t take time off even though the season just ended.

The offseason is where weight lifting and conditioning is emphasized, and Picayune is ready to get bigger, faster and stronger in preparation for next year.

“We’re going to work to get better and get stronger. Now it’s time for these junior classes to step up and be those leaders. We’re going back to work, and we’re always working towards perfection. The ultimate goal every year is to win a state championship and that starts this week,” Stogner said.

The athletes know what’s expected of them every year as a Maroon Tide player.

Getting to a state championship is a tough road, but one the athletes have to embrace as the team heads into the offseason.

“When you play at Picayune you’re striving for perfection, striving to be a champion. Being a champion, you have to pay a price, and we’re working toward that and paying that price,” Stogner said.