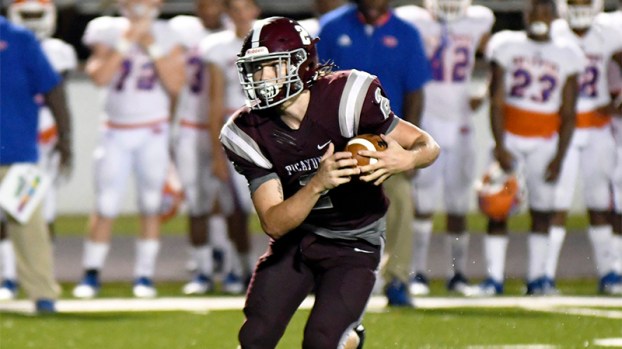 Filling Up The Stat Sheet: Running back Austin Samples looks for a running lane during a game this season. Photo by Jonathan Mitchell.

The Picayune Maroon Tide took on the Pascagoula Panthers over the weekend and lost 42-35.

The loss was Picayune’s first of the season, ruining the team’s perfect record.

Picayune is now 5-1 in district play heading into the regular season finale against Wayne County on Nov. 6.

The game between the two teams took place on Saturday because of inclement weather and damage caused by Hurricane Zeta that made landfall last week.

Head Coach Cody Stogner said his team made too many mistakes against a talented Pascagoula team to pull out the win, even though the Maroon Tide had an opportunity to pull it back at the end of the game.

“Offensively and defensively it wasn’t our best game. We didn’t come ready to play and that’s my fault to make sure we are more ready to play. Give credit to Pascagoula though, they executed well and played a near perfect game,” Stogner said.

The game between Picayune and Pascagoula had an afternoon kickoff time, so the Maroon Tide had to hit the road early in order to make it to Pascagoula’s stadium on time.

This was the second game Picayune has had to play on a Saturday because of inclement weather, and along with all of the chaos caused by COVID-19, Stogner said his athletes have been through the ringer this year but still performed well.

“I have to give my guys a ton of credit. The amount of adversity they’ve been through this year whether quarantine or hurricanes, (has been incredible),” Stogner said.

Picayune’s offense was led by running back Austin Samples who had 256 all-purpose yards and two total touchdowns.

Running back Dorian Robinson and quarterback Isaac Hickman also had rushing touchdowns, while Hickman had another passing touchdown to Noah Carter that went for 56-yards.

Stogner said Samples’ effort and tenacity set an example for the rest of the team as the senior has shouldered more of the offensive burden this year.

“He’s our senior, he’s our leader back there and is tough as nails. You know for a fact he’s going to give everything he’s got. He’ll fight to the end for you. He’s put in the time and the work, and we rely on him,” Stogner said.

Picayune will now prepare for this week’s opponent, the Wayne County War Eagles, with a chance to seal a district championship and secure a number one seed heading into the playoffs.

Wayne County presents a challenge for Picayune not only because of the team’s talent and winning customs, but also because the War Eagles haven’t played in several weeks.

“When you talk about Wayne County football it’s a big deal. There’s a lot of tradition, a tradition of wining. Unfortunately they have had some bad luck this season and haven’t had any football in three weeks. That’s kind of scary in a sense because we haven’t gotten to see film on them from the last two weeks, and they’re going to be very fresh,” Stogner said.

The matchup between the War Eagles and Maroon Tide will take place at Lee-Triplett Stadium Nov. 6 with kickoff set for 7 p.m.

In what has been an unusual year, the Picayune Maroon Tide band took part in an unusual competition last Saturday... read more