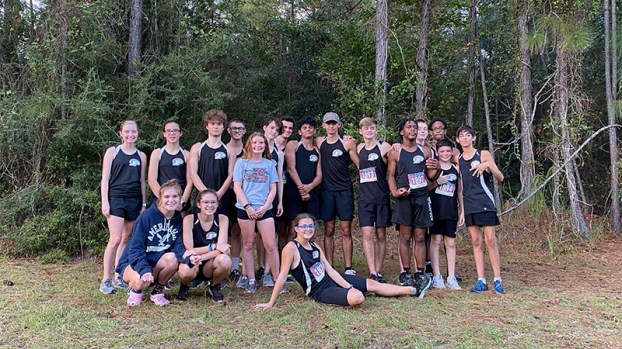 All Together: Head Coach Chris Wise said his cross country team this year was filled with talent, which in turn led to decent placements at the state meet.

According to milesplit.com, the official website for the state meet results, the girls team’s placements were good enough to earn eighth place, while the boys team finished in tenth place overall.

All season Head Coach Chris Wise has been complimentary of the balance displayed by his teams. The athletes are evenly matched and will now look to improve heading into next season since all competitors who went to state will return for the 2021 season.

“My hope is that everyone will continue to get faster so when they come in together our team score will go up. I think there’s a lot to be said about coming in pretty close to each other. They’re pushing each other and improving together, but it also helps in terms of score,” Wise said.

The relative inexperience in both teams means there were some nerves heading into the race. The state course had also been altered, meaning runners who had competed in the state meet last year were competing on this year’s course for the first time.

As the athletes gain more experience and continue conditioning, Wise is hopeful the times will improve.  This season was anything but normal as the athletes had to deal with competing in the midst of the COVID-19 pandemic, but Wise said his runners did a good job of focusing only on what they can control. “They continued to improve and continued to show passion even up until the last week. They continued to improve throughout and through (obstacles) like if they got sent home for awhile (to quarantine). I’m pleased with where we went (this year),” Wise said.

Some of the runners will now move off to take part in other sports, but those who stay will get back into the swing of things next week. Cross country is a cumulative sport, meaning athletes can’t take extended periods of time off otherwise their stamina will suffer.

The runners must constantly put in the miles to stay at the top of their game.

Wise said that as the teams continue to train through the “offseason” the athletes will also take part in some local recreational runs to stay in shape.

“We’re going to try to keep them in shape, but also build base miles. You can’t quit thinking about it. There’s no true offseason. We’ll begin to think about next year and set goals,” Wise said.

The Picayune Maroon Tide must rebound this week after a close 42-35 loss to the Pascagoula Panthers. The game was... read more