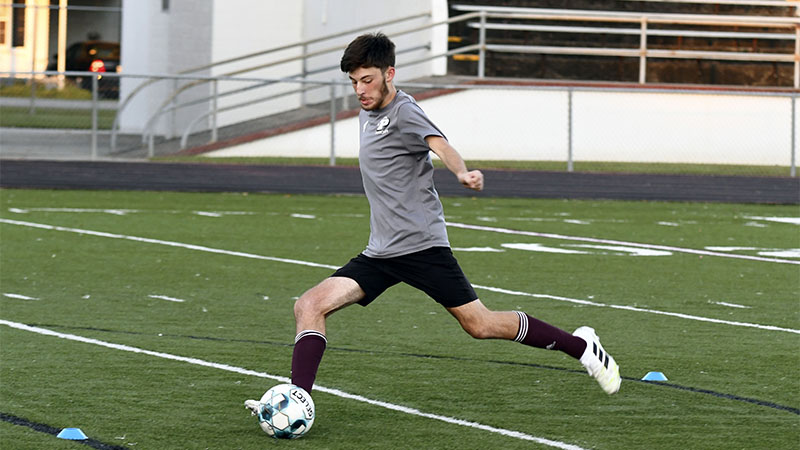 Final Third: Junior midfielder Nick Walerius takes part in a shooting drill during a Maroon Tide soccer practice. Head Coach Britton Fortenberry said his team will be looking to improve on the offensive side of things before the team's next game. Photo by Jonathan Mitchell.

The Maroon Tide tied Petal 1-1 and the South Jones game ended in a 0-0 draw.

This allows squads to get a full game’s worth of action in while going against different formations.

Picayune Head Coach Britton Fortenberry said he saw room for improvement in his team’s performance, but since it was a jamboree the performance was decent.

“Overall, I was pleased with the performance, especially for our first real game action since last season. In both games we dominated, we just had trouble finding the back of the net. I was really happy with how we created chances and we took a lot of shots,” Fortenberry said.

The team lost out on spring training and a good portion of the summer because of COVID-19, so the pre-season practices focused more on implementing new systems of play and conditioning than anything else.

The jamboree serves as a way to see how prepared the team is for a true game, while also giving Fortenberry the opportunity to get a lot of his athletes on the pitch.

Experimentation on the field is another hallmark of jamboree matchups and the story was no different for the Maroon Tide.

Last year the team played a 4-5-1 formation, but over the weekend Fortenberry had his team try a 3-5-2 formation.

The team’s group of talented, experienced defenders means the new formation may become the norm for Picayune.
“We went back and forth between the two and I thought the guys responded well. I wanted to see how they’d look in a 3-5-2, especially in the back. With the experience we have along the back line we can play three at the back,” Fortenberry said.

Conditioning will be a continual process as the athletes get their legs back before the season goes into full swing.

Alongside conditioning, Fortenberry said his team is going to focus on cleaning things up in the offensive half of the pitch before the Maroon Tide’s next game Nov. 5 against Forrest County.

“The next few days (of practice) will be dedicated mostly to attacking soccer and finishing. We’re going to be doing a lot of shooting, trying to put balls in the back of the net. We’re trying to clean up some tactics on the offensive side with runs off the ball and combination things,” Fortenberry said.

The match against Forrest County will be an away game for the Maroon Tide, and will begin at 7 p.m.