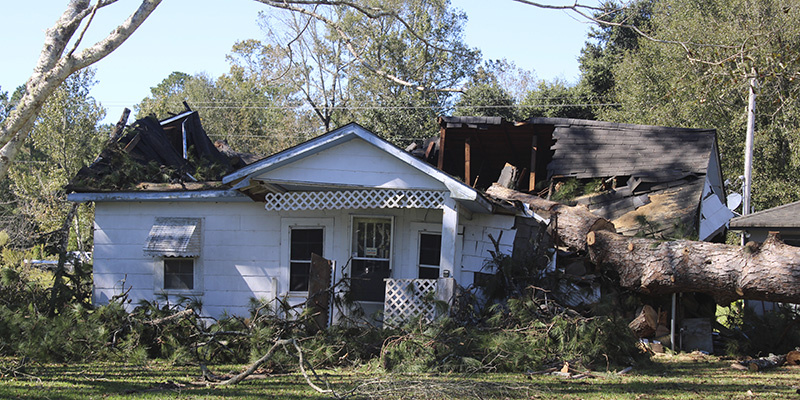 A tree fell through this home on Highway 11 during Hurricane Zeta. Most of the hurricane damage in Pearl River County was minor. Photo by Cathy Cook.

County officials do not believe enough damage from Hurricane Zeta occurred in Pearl River County to qualify for federal assistance to be reimbursed for debris cleanup.

During a regular Board of Supervisors meeting Monday, Emergency Management Director Danny Manley agreed with other county officials that he does not believe the county has enough damage from the storm to qualify for federal assistance. However, documenting the damage is important, in case there is a federal declaration, he said.

Road Manager Charlie Schielder said he wants to ensure residents know the roads department cannot help them pick up debris left from the storm on their property without federal assistance. Residents are asked not to leave debris by the roadway or in county ditches, because the road department does not have the capacity to clean up additional debris.

“That’s what would overwhelm us, if everybody started taking debris off of their personal property and putting it into our ditches,” he said.

Approximately 40 people in the county have reported damage from Hurricane Zeta using the crisis track app, said Manley. Most of the damage was minor, although one vacant home on Highway 11 had a tree fall through the house.

Board members commended the road department and volunteer firefighters for clearing debris out of roadways quickly after the hurricane passed.

In a separate matter, the Board approved the distribution of CARES Act funding that will provide hazard pay for poll workers during the election. The county will also be able to be reimbursed for any additional poll workers who are needed during Tuesday’s election. The Board already has a memorandum of understanding regarding the funding. But at the request of the state auditor’s office, the Board needed to approve additions that specifically outline how the funds will be distributed at each precinct, said Circuit Clerk Nance Stokes.

Stokes’ staff worked through the night Saturday to ensure they would be able to print poll books in time for Tuesday’s election. The county’s Resolution Board will determine whether or not absentee ballots should be accepted or rejected throughout the day Tuesday, but will not begin counting absentee ballots until polls close Tuesday night.

Stokes is expecting a large voter turnout based on the high number of absentee ballots. Polls will be open from 7 a.m. to 7 p.m. Tuesday.

“We’re very blessed, because a lot of the coastal counties, I think there’s still six precincts in Hancock that don’t have power,” said Stokes.

The next regular Board meeting will be Wednesday, Nov. 18, at 9 a.m. Board members will also be meeting with some of the volunteer fire department boards on Thursday, Nov. 12, at 6 p.m.