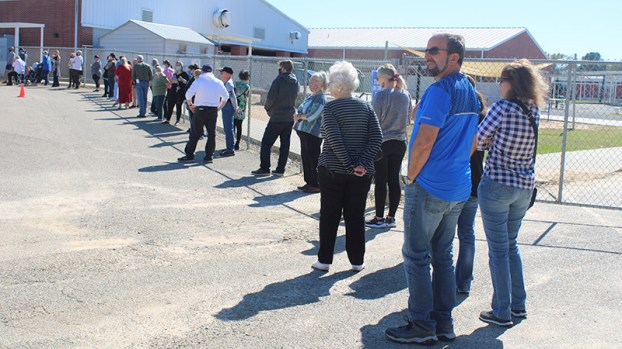 RECORD TURNOUT: A line of voters curved around the parking lot of the storm shelter near Pearl River Central Middle School Tuesday. Photo by Cathy Cook

A line at the Margaret Reed Crosby Memorial Library stretched far past the building by 6:50 a.m. At midday a line of voters was still wrapped around the Pearl River Central Middle School.

When polls closed at 7 p.m., 170 voters were still lined up at the FZ Goss precinct, said Election Commissioner Reggie Hanberry. Poll workers were not able to close that precinct until 9:15 p.m., he said, in order to allow each voter to cast a ballot.

Three precincts still had not brought results back by 10 p.m.; FZ Goss, Carriere 3 and Carriere 5.

In previous years, election results are typically released as precincts come in on election night and are counted.

However, this year results in Pearl River County were not expected to be released until very late in the evening, and that later changed to by Wednesday, due to a change in how the county processes absentee ballots, said Circuit Clerk Nance Stokes. As a result, no results were available by press time Tuesday.

Stokes said that in previous years, poll workers scanned absentee ballots at their respective precincts, but recent changes in state election law meant that the county Resolution Board did not start scanning the absentee ballots until after the polls closed at 7 p.m.

As of 9 p.m. all of the absentee ballots the Circuit Clerk’s office had received for District 1 were scanned, but the remaining four Districts still had to be scanned, said Stokes. Although all but four of the 26 precincts had brought in ballots by 9:30 p.m., Stokes said that she could not release any results from precincts without their respective absentee ballots being scanned. She was unsure when the task of scanning absentee ballots would be complete.

Stokes said that her office sent out 4,852 absentee ballots since Sept. 21, double the number in the previous presidential election. Of that total, 230 absentee ballots remain to be received back at the office via mail. As long as the ballots are postmarked by Tuesday, Nov. 3 and received by Nov. 10, they will still be processed.

In the county courthouse, the Resolution Board determined whether to accept or reject absentee ballots throughout the day, but counting did not begin until 7 p.m.

Due to the high number of absentee ballots cast, the Resolution Board stopped counting them at approximately 11 p.m. Tuesday and was expected to resume their count at 8 a.m. Wednesday. Election Commissioner Reggie Hanberry estimated there were still 1,300 to 1,400 absentee ballots left to be scanned.